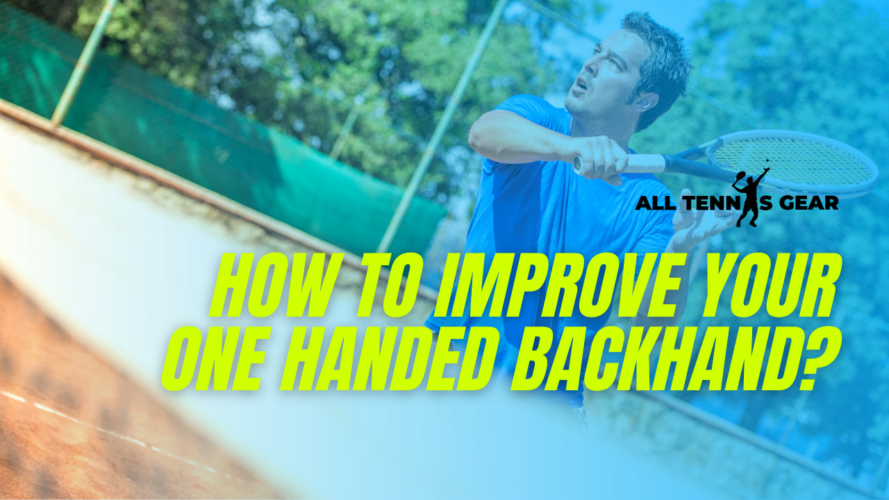 The backhand tennis shot involves swinging the racket around the body with the backhand. The backhand stroke is basically an approach or baseline shot.

Backhand stroke is a difficult technique to master. It is shot by the player’s hand, so it is a bit more difficult to master. There is less consistency in this one.

But, with enough practice, you can learn how to hit a one handed backhand. This article will help you with that.

What is One Handed Backhand?

There are two types of backhand shots. One is one-handed and the other is a two-handed stroke. The players decide their shot according to their terms. In this article, we are going to discuss the one-hand backhand stroke.

There are many highlights to the one-handed backhand. The modern one-handed stroke has more torque and topspin. This allows the players to create more acute angles.

By this, they can take the opponents out more easily. The one-handed stroke can produce more force if it is set up properly. It will hit with more speed.

The players who play with the one-handed have a notable forward more momentum. So, they have greater ease with the net.

Many players use the one-handed backhand technique because of its greater reach. They can penetrate more and allow players to create a better slice.

The timing and strokes need to be perfect in this shot. While the one-handed approach has its disadvantages, if you can master them, you can have an upper hand in the court.

How to Hit a One Handed Backhand: Important Tips

The grip is one of the most important things in the one-handed backhand approach. The wrong grip can mess up the entire approach. Eastern backhand grip is suggested for this shot. Your knuckle of the index finger will be on top of the grip.

Many professionals have tried Western backhand grip. But you can decide this after you have mastered the stroke.

Until then, it is always recommended to go for the Eastern backhand grip especially if you are practicing. Most of the players play with this grip.

In a one-handed backhand, you need to hit with a closed stance. The player needs to step slightly across the body for hitting the ball.

The racket needs to rotate the body like a unit in this stroke. In most of the strokes, the rackets are dealt with arms.

The racket head will be pointed towards the surface before swinging it upwards for your shot. The arm will stay straight completely as the shot demands.

For the top spin on the backhand, the racket will need to be moved to a higher position from a lower position.

The shoulder will stay sideways with contact in front of the front foot. The net and racket head should be in a parallel position with each other.

How to Improve Your One Handed Backhand?

These tips will help you improve your one-handed backhand stroke. They discuss the stance, grip, and racket position.

One-handed is a difficult stroke to learn and master. The shot demands a high level of work and training. It requires more time to completely get a hold of the skill. But if the player can put in the necessary work for it, they can master this stroke easily.

The professional players who are dominating the court with their backhand stroke skills did not learn it overnight. They worked for this their whole career.

Set goals for yourself every day to learn these skills. Learn and understand different elements of your game and then work towards it.

Keep training until you get everything starting from the stance to grip, right. Train yourself until you feel the shot to be effortless. You will improve at your pace.

Don’t get frustrated if you don’t master it so soon. Work towards perfecting the shot. The improvement may be slow, but remember, slow and steady wins the race.

Read More: How to Hit a Kick Serve in Tennis?