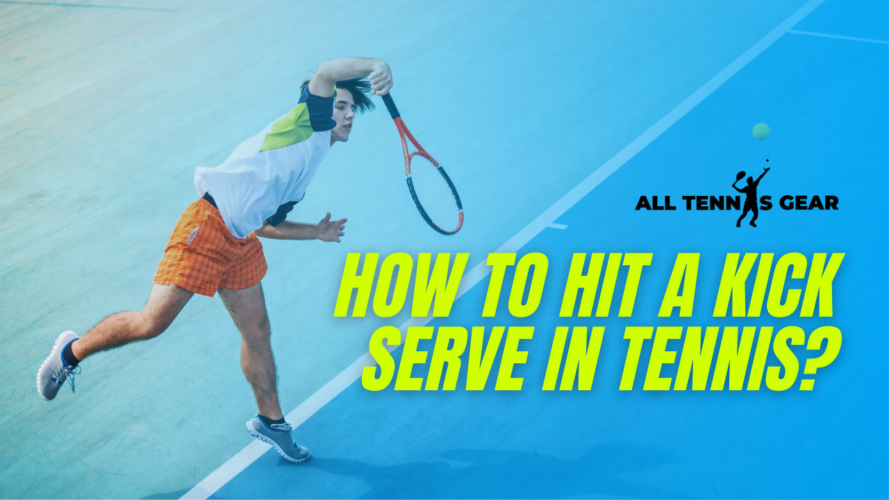 One of the most crucial parts of tennis is its serve. A lot is determined based on how good the tennis serve is. While there are multiple routes that the player can choose, a kick serve is a powerful serve that can leave the opponent conservative or defensive as it can confuse them. With that being said, let’s walk you through how to hit a kick serve in tennis to dominate the match.

How to Master the Kick Serve?

Let’s learn how to hit a kick serve in tennis perfectly.

For the kick serve to reach its maximum potential, the initial step is to have the correct grip. I used to grip the racquet too tight which always led to an unsuccessful kick serve.

Later, I learned how continental grip is the right one to use as the index finger is well spread and the bottom of the palm is off the grip.

You can also shift to a strong continental grip where you need to move the grip slightly towards the backhand side. If you’re mastering the kick serve rather than learning it from scratch, an Eastern backhand grip would be great too.

Incorrect stance can also lead to a poor kick serve. This should not only be chosen based on what is right but also how good you are at shoulder movements mid-serve. For example, if you don’t have a big shoulder turn you’ll be inclined towards slice serve.

For me, a platform stance worked the best as it allows you to combine a shoulder turn and hip turn on the initial move. Plus, it keeps your wrist relaxed as it helps you get into a trophy position with ease.

A lot of players make the mistake of either leaning too forward while tossing or they place the ball towards their dominant shoulder.

This leads to the ball hitting the net and defeats the purpose of a kick serve. Although I used to do the same, I corrected myself by tossing the ball over my non-dominant shoulder which allows you to form a massive spin.

The movement should seem as though your opposite shoulder and the ball are about to come in contact. This, in turn, will create a circular path and at the same time, your body will create a balance.

To perform the ideal kick serve, you need to understand that you shouldn’t bend your body backward. Rather, the correct bending of the knee will allow you to carry out a kick serve properly. To do so, keep your chest up and keep your eyes on the ball.

Your back should be in a good posture to prevent any possible injuries. However, let your knees bend to an extent that allows your whole body to lean back a little. This is important for the ultimate hit.

Proper balance is required to complete a kick serve without falling sideways which happens due to leaning back too much.

So, when you’re practicing kick serve make sure you’re not falling backward. As suggested before, your body leaning backward should be focused on your knees.

For some people, jumping slightly forward works great to keep the body balanced. Even though I do not prefer that, it might work for you.

Sometimes, even after following all the previous steps, you may not be able to master the kick serve. In that case, you should focus on the finish and how you can perfect it.

Try to alter a few techniques to see what works best for you. For example, you can try to finish at the same side of the body instead of going for the circular path.

Also, to create the right amount of space at the finish, you should keep your hand away from the body. Finishing with a straight arm will just cause discomfort and tension on the arm muscle.

When to Use a Kick Serve?

Although it depends on the player and when he/she wants to perform the kick serve in the match, following the below two will surely work in your favor.

A great time to perform a kick serve is during serve and volley. Here, there’s more time for the player to reach the net as the ball moves slower in this case than on a flat serve.

As a Second Serve

A kick serve is more consistent than a slice serve or a flat serve as it allows a higher net clearance. This is why it’s a great option even as a second serve since there are lower chances of error.

To put it in simpler words, a kick serve mimics a twist serve where the ball jumps and shifts to the right when it lands. On the other hand, in a topspin serve, the ball just jumps when it lands.

In the case of a kick serve, the opponent gets conservative which allows you to have more open space in the court. However, a topspin can surprise the opponent and reduce their reaction time significantly.

Both of the serves have disadvantages too. For example, unless you’re able to reach sufficient depth in your kick serve, the opponent can easily reach for the ball to hit back.

In terms of a topspin, it’s extremely tough to achieve one. Even professionals end up hitting a 7 to 1 which is equal to a mild kick serve.

Getting a kick serve right requires a lot of coordination, physicality, and determination. While understanding how it works will help you in the court, it will only be attainable through thorough practice.

If this is your first time trying a kick serve, there’s a long way to go. However, if you already know the move, following this article should help you perfect it.

Related: Top 11 Fastest Tennis Serves Ever Recorded (+ How To Measure Yours)