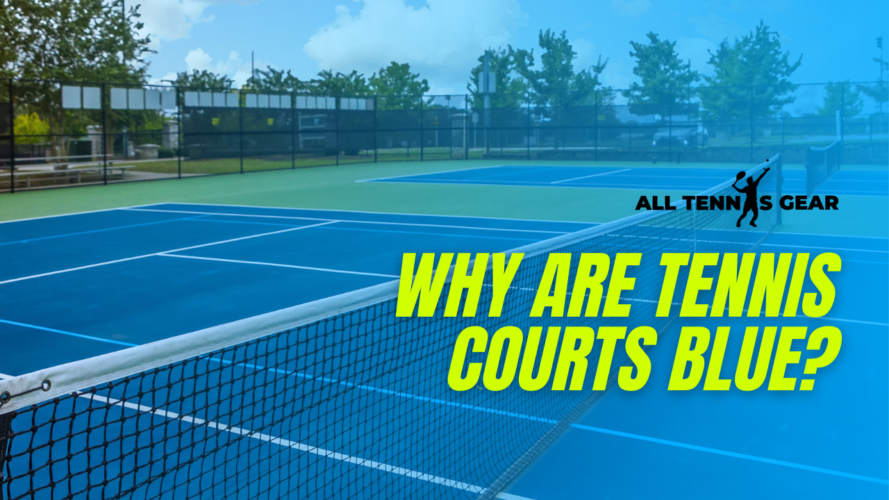 The optic yellow tennis ball against the blue court ensures the perfect contrast that’s not just easy on the eyes for the audience present there but also for viewers on television.

Fun fact: Tennis courts weren’t always blue though. In 2005, the U.S Open converted its courts to Blue followed by the Australian Open in 2008. Later, all professional tennis courts across the world switched to Blue as well.

But why Blue? In this article, I’ll be giving you the reason why are tennis courts blue. But first, let’s take a look at how the tennis court colors have changed over the years.

As we know when tennis courts were made of clay or grass, there was no possibility of a change of color due to their natural composition. If you saw a green court, it had to be grass and if you came across a red court, it was surely clay.

However, there were some cases when it was made possible like the time when Madrid Open opted for blue clay.

After the transition from natural surface courts to hard courts took place, court designers decided to still stick to green (similar to grass) solely based on the fact that it would work great since grass courts worked just fine.

By the early 2000s, the majority of the courts across the globe shifted to green. Except, in some countries where they decided to experiment on the polar opposite color, red.

Changing colors of the tennis court isn’t something tennis tournament organizers took lightly. After a lot of consideration, many organizers realized the importance of contrasting colors.

The idea was to visualize how the neon yellow tennis ball would stand against the court color. This is when the colors blue and purple were starting to ease into the tennis world.

Why Are Tennis Courts Blue?

Initially, US Open decided to switch all the tennis courts to blue mainly due to two reasons: Visibility and branding.

After that, other countries followed through and blue tennis courts became the norm. However, the decision to convert the court to blue did not happen overnight.

The focal point here was the color of the ball itself which is optic yellow. The idea was to come up with a coloring that will increase the visibility of the ball.

Even though neon yellow/green should be quite visible to spectators, a contrasting background should make that even easier. This is when the color spectrum was inspected.

If they opted for a darker green it wasn’t going to make much difference as it’s quite similar to the greenish-yellow color of the tennis ball.

Looking at the other end of the spectrum was red. But the greenish-yellow of the ball is opposite to blue/purple. Therefore, this contrasting option was chosen keeping in mind the interest of the television viewers.

The other reason was branding. Once the US Open decided to switch to blue tennis courts, they did so even for any major tournament played in the US.

This increased the popularity of the color. So other countries wanted to associate tennis with blue courts as well.

How US Open Switched to Blue Tennis Courts?

According to a study done by California Sports Services, the color blue is aesthetically pleasing to both the spectators as well as television viewers.

After a lot of consideration and testing on the color wheel, the opposite of neon yellow-green was chosen, which settled at the blue-purple spectrum. Finally, Pantone blue 2965 U was selected which is officially known as the US Open Blue.

Now that the color of the in-bounds play was fixed, US Open wanted to fix a color outside the lines as well. The California Sports Services came into rescue again and suggested a darker shade of green would be the perfect contrast.

After running tests, Pantone 357 U was chosen which turned out to be known as US Open Green. The combination of blue inbounds and green exterior provides US Open a unique look.

Plus, spectators and television viewers have accepted the color so well that the majority of them cannot even imagine the court being any other color. This in itself proofs that US Open took the right decision in 2005 to switch to blue tennis courts.

How Did Switching to Blue Courts Turn Into a Branding Tactic For US Open?

US Open is the most renowned hard-court tennis tournament which takes place in the fall i.e. late August and early September. Before the main tournament, multiple other tournaments take place which falls under the US Open Series as well.

The branding tactic played here was that the same blue tennis court is used for not just the biggest tennis tournament but also the several other tournaments that lead up to it. This created a sense of familiarity among the audience.

They simply started correlating the color blue with any tournament under US Open. Now that the majority of viewers were habituated with the color, other tennis courts started following the change and switched to blue tennis courts.

Consequently, red and green courts are not considered professional anymore. The branding of the blue court has been so successful that even parks and schools are shifting to it.

Even if they do not follow the exact color code for blue, they’re switching to various shades of blue to match the US Open tennis courts.

If you look back on the times when tennis courts used to be green, you’ll be able to realize how switching them into the blue was indeed the right choice.

What’s great about this change is that both players and spectators enjoy the eye-pleasing color.

Before you know it, every tennis court in the world will be switched to blue even if it’s used for playing tennis as a hobby.