Wilson re-engineered the Blade 98 v7 tennis racquet to provide players with enough plow over, power, and accuracy, upgrading the classic Blade line for its seventh version. They also eliminated the Countervail dampening and placed their new FeelFlex technology in its stead to help inject more feel and torsional stabilization at impact.

The Blade 98 is control-oriented with a dense 18×20 string template. On your very first court game, you would note the modified feel and playability of the racquet.

For almost over a century, Wilson has been a pioneer in the tennis industry, constantly testing the limitations of invention and imagination to produce some of the best tennis racquets one can find.

Not only on small neighborhood fields and tennis courts in various clubs but even on the major stages of the sport, Wilson tennis racquets can be seen quite often.

A lot of former and current tennis stars, such as Roger Federer, Serena Williams, Simona Halep, Pete Sampras, and so on, have won several tennis tournaments on the court with Wilson tennis racquets in their hands.

About the Blade Lineup

The Blade lineup from Wilson opens up a little more power and spin than the edition of Pro Staff racquets. With this, the racquets are a little more durable and convenient for players who want to play defensive or a tennis type of counter-punching.

Since the more head-heavy balance helps the racquets to slice through the air, the racquet is named Blade. The Blade racquets are more robust as well, even at lower static weights with the weight distribution. 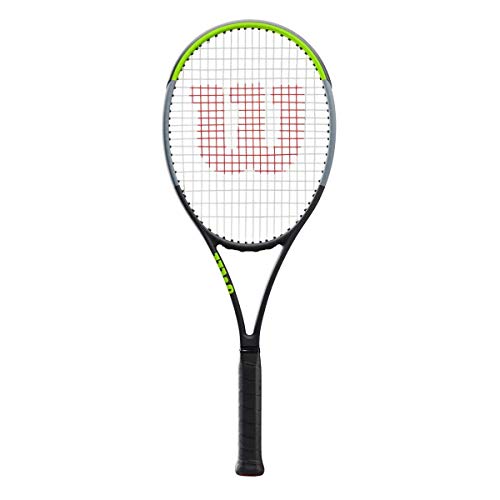 For a more stable feel from frame to frame, Wilson has also lowered the spec variation on the new Blades.

The Blade 98 18×20 v7 showcases a tri-colored concept with straight lines and an elastic paint finish. You can also see the cutting-edge creativity that provides amazing performance for the players.

The FeelFlex technology is a noticeable extension of Clash’s groundbreaking FreeFlex technology that uses strategically positioned carbon mapping in the racket frame to offer a more connected feel. For a more relaxed grip on the top-hand position, the racquet comes with a Top Grip Taper.

The Blade 98 is significantly more head-light than the previous edition and is made of Braided Graphite and Basalt to help increase sensation and control in flex.

Blade 98 tennis racquet can continue to be a favorite of competitive and advanced players everywhere with a string weight of 11.4 ounces, and a 20.6 mm beam.

The Blade v7 is here to replace Countervail and is a technical upgrade from Wilson. It helps the company to take another step forward in the efforts to increase comfort levels. With the Blade 98 CVs, the major criticism was that it lacked feel.

Some players might prefer a deadened racquet in their hands, but the quantity is very small. The CV was great at absorbing shocks but the feel wasn’t up to the mark. That’s where the Blade 98 v7 comes in, with its advanced FeelFlex technology in place.

After the initial testing with the v7, most of the users agreed that the feel of this 18×20 is much better than most of its previous models. 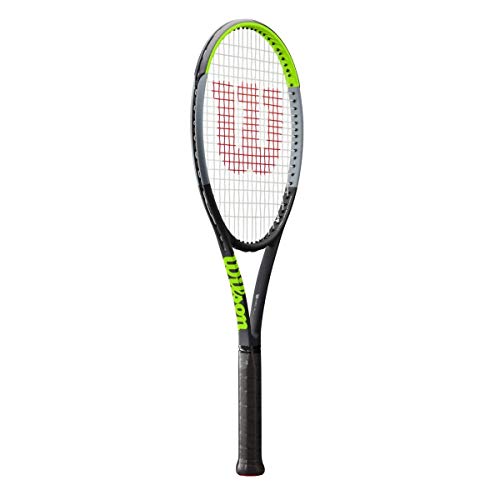 The Blade 98 18×20 v7 is very stable when it came to hitting balls off the deck. On touch, the racquet felt quite smooth and plush on my hands. It is one of the most comfortable racquets I’ve tested.

The swing-weight of the Blade 98 is perfect for me. I paced the ball quite well from both sides and discovered that I had great control on the swing without worrying about the ball’s landing position.

The Blade 98 18×20 v7 had a lot of grips, and I found enough strength to penetrate my shots into the court. I was delighted with the modified feel and spec of the racquet. You can get a nice connected-to-ball to feel with the racquet in hand. I had no trouble swinging quickly and hitting the balls deep.

Compared to previous models, I think the best thing I found about this version is that you would have a lot of mass as you hit the ball. You won’t have to swing very hard to get the ball rolling. You can automatically swing and produce pace without any special skills.

There is a nice balance of control and strength with the Blade 98, but mostly, this racquet was more on the control-oriented side. Despite the higher swing-weight, the Blade v7 was pretty maneuverable, so I could produce solid head speed for the racquet.

Lastly, from the backcourt, this upgrade provided a familiar, albeit subtly enhanced Blade feel. It was surprisingly stable against hard hitters while getting used to its around 330 swing-weight took a bit of an adaptation.

With this stick, my lateral control was perfect. With round, smooth polyester, the depth and access to spin were strong. My backhand slice was very accurate and 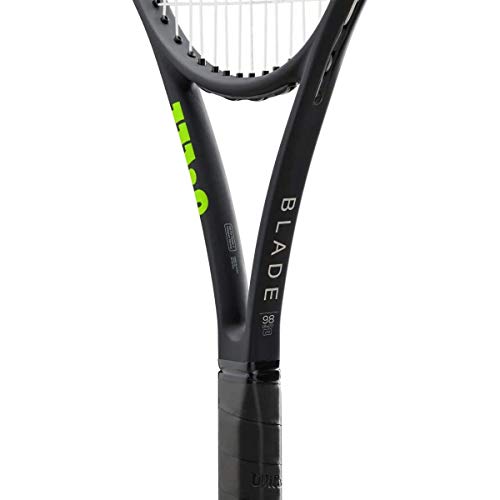 The way this racket plays, I really like it. It’s not too hard, it’s not too soft, and it helps you to tear through the giant racket head speedball while allowing you the control to hold the ball on the court.

A lot of bigger hitters go for hard rackets, but I think the Blade 98 v7 18 x 20 while weighing around 300g, is one that they could consider. It has strong consistency that results in good regulation and the levels of power are just about perfect.

This racquet should be enjoyed by seasoned players looking for a great feel and accuracy. Filled with power, control, and plow-through, for intermediate and advanced players who want the racquet of a classic player, this is a fantastic choice. This racket is perfect for high-skilled players with its amazing mixture of power and enhanced control.

Now the question is, for heavy hitters and advanced players, the Blade 98 v7 is excellent, but how would it work for more intermediate or professional players?

Well, the answer would be, it’s still a great choice!

The design of the 18 x 20 string pattern rackets means you don’t get too much quick strength and spin, but the Blade 98 v7 provides a lot if you like rackets that play that way.

With this stick, the main thing is racket head velocity. To build strength and spin, you have to be able to swing quickly, and the Blade 98 helps you to do that.

The Blade 98 from Wilson has arrived for the professional player possessing a commanding sensation.

Now in its seventh version, without Countervail material and instead with Wilson’s new FeelFlex technology, the Blade 98 18×20 has Carbon Mapping for improved stability and versatility in torsion.

The Top Grip taper on the handle is also recent, resulting in better placement of the hand for the players that have two-handed backhands.

The Wilson Blade 98 v7 makes the high-performance playability and elegant cosmetics make it exactly what you need with outstanding control and feel.

The Blade 98 could be the perfect companion on the tennis court if you want to play with a creative flourish and would choose control over strength or spin. I have to admit that I prefer the “flex technology” that Wilson seems to be focusing on.

For the Wilson Blade racquets, I think this is a move in the right direction. The technology works and makes what was a very comfortable racquet marginally more comfortable, but most notably, without removing the feel.

Many players with maximum swings who are looking for something that mixes maneuverability with control can choose the Blade 98 v7 18×20. It would allow you to hit with great power and spin.

I can conclude that the Blade 98 18×20 v7 tennis racquet worked solidly and reliably from the baseline and gave great accuracy and plow through.

Services and returns also proved beneficial, with great feeling, security, control, and power. I can say confidently that the Blade 98 18×20 v7 to be one of my favorite racquet models I’ve tried.