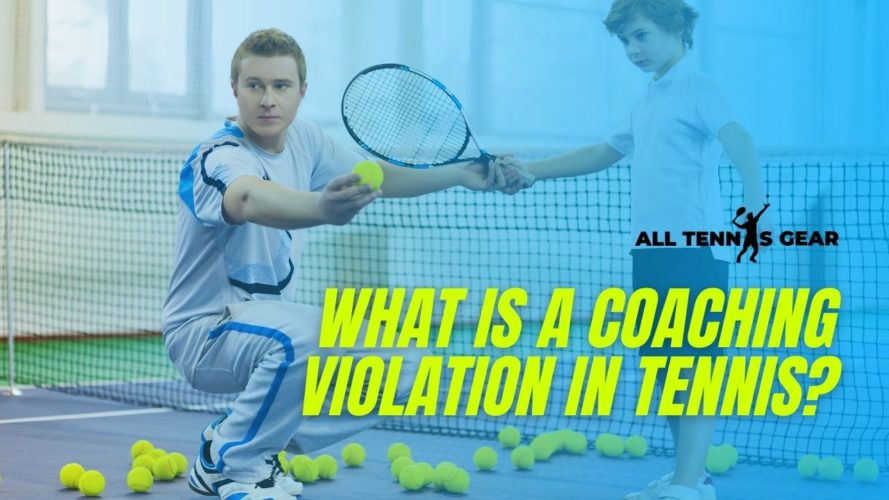 Tennis is one of the most challenging and renowned sports in the world since the players are all on their own.

If you are unfamiliar with the sport, you may be curious about what is a coaching violation in tennis?

When you watch tennis on TV, the coaches are seen every time a point is over. Even so, you’ll never see them on the tennis court.

Can Tennis Players Talk to Their Coaches During a Match?

Various events have different regulations, but in general, male tennis players are not permitted to speak with their coaches in any situation.

In Grand Slams, both male and female tennis players are not permitted to speak with the coaches at all.

While the outline above provides a basic knowledge of on-court coaching restrictions, the laws are not always clear.

Every so often, you might learn of a player going insane because of a coaching violation, but it’s difficult to comprehend why. We will try to simplify the tennis coaching rules below.

What is a Coaching Violation in Tennis?

A coach is regarded to have made a coaching violation if he or she tries to interact with a player, either visually or verbally, when he or she is not permitted to do so.

When an umpire finds a coaching violation, he would first issue a warning to the player.

If this occurs a second time, the player will receive a Point Penalty, meaning he will lose a point. If it occurs a third time, a Game Penalty will be imposed, resulting in the loss of the whole game.

After that, the umpire may insist that the coach be escorted from the stands.

How Does Coaching in Tennis Work?

Singles tennis is an individual activity rather than a team sport, and it is considered to be one of the most isolating sports to participate in.

During a boxing match, for instance, fighters may have up to three “seconds” who can provide advice as well as treat injuries and swellings between rounds.

However, on the tennis court, there is nothing but the player, their ideas, and their opponent to contend with.

Even while athletes gain from tutoring during daily training sessions, they are absolutely forbidden from getting assistance from their coaches throughout warm-ups and matches during Grand Slam events, which take place four times a year in the United States.

What constitutes coaching may or may not be determined by the match umpire’s perspective. It might include clear instructions or even coded hand signals, among other things.

A tennis coach is in charge of encouraging a tennis player to take on specific tasks or to sign contracts with a certain organization.

The ability to persuade is essential for any coach since they will be accountable for inciting these players to take the daring moves that will drive their careers forward.

Why Is Coaching Not Allowed in Tennis?

In the start, many players did not even bother bringing coaches to any of the events they participated in. Furthermore, it was perceived as being not only largely unneeded but it was also excessively costly.

Just in the last few decades has the pay been stable enough for the majority of the world’s best players to travel to other competitions across the world with not only their coach but also other members of their team to compete.

Players with a low ranking, on the other hand, would be at a serious disadvantage in most events because they simply cannot afford to have their coach present to provide assistance.

Tennis has been slow to adapt, mostly because it is an individual sport, and part of the attraction is observing the physical and mental aspects of the game as they unfold on the court.

Numerous supporters are vehemently opposed to coaching in this manner, believing that athletes should be left to find things out on their own. It transforms the game into a true one-on-one encounter.

On-court coaching may help players improve their performance. Now, it is permitted in every other sport. It is possible that having a coach on hand to advise an athlete will result in better performance.

Even the finest tennis players might benefit from the advice of a professional when facing a particularly challenging match.

The ability to concentrate on competing rather than remembering appropriate methods would help them to compete more effectively.

Another benefit is that it is seen as unavoidable in the first place. During non-Grand Slam competitions, on-court coaching is permitted. By putting it into effect, the argument would be brought to an end, and the sport could go forward.

Is there a potential downside? It does have the potential to slow down the speed of play. During the intermissions between serves, the players had nowhere to go.

It seems certain that having a coach on the court and establishing some type of timeout system will lead to more time being spent on the court without adding any genuine tennis activity.

Are Coaches Allowed to Coach in Tennis?

Coaches can assist you in preparing for games, but you must do it on the court and react to any new scenarios that may emerge.

For instance, your opponent may be playing differently than you think, or you may be having difficulty with a certain aspect of your game. You might have to deal with that all by yourself.

Except for the Grand Slams, the Association of Tennis Professionals is in charge of all major men’s tennis events. The ATP has a particular set of regulations, and every ATP tournament must follow them.

Male tennis players are not permitted to obtain any type of coaching from a coach in any ATP tennis competition, whether the instructor is inside or outside the court.

According to the ATP Rulebook, “Players shall not accept coaching during a competitive match.” Interaction between a player and a coach, whether audible or visual, could be interpreted as coaching.  This implies that coaches are not permitted to enter the court or provide guidance from the stands.

So, regardless of who you are, you will still have to perform a professional tennis match by yourself. But coaches routinely violate these regulations in order to speak with their players without drawing the attention of the referee.

If an umpire catches a coach offering directions to a player during a match, it can result in a coaching violation and a $5,000 punishment.

The Women’s Tennis Association (WTA) is the female version of the ATP. It organizes all major tournaments other than Grand Slams and has a separate set of regulations.

When it comes to coaching laws, the WTA and ATP share a number of the same ones, such as prohibiting audible or visible communication during the game and penalizing players up to $5,000.

The WTA, on the other hand, permits players to seek on-court coaching once each set. So, if a player thinks she needs a change in tactics and needs to speak with her coach, she may inform the umpire, and the coach will be permitted to accompany her the next time the teams switch.

On-court coaching occurs fast (around 60-90 seconds), and the coach must promptly depart the floor. Every time a coach comes onto the court to coach, he or she is outfitted with a microphone, and what they say is generally shown on TV.

The International Tennis Federation organizes the four greatest tennis events in the world, known as the Grand Slams.

When it concerns on-court coaching, the ITF does have its own set of regulations that participants in Grand Slams must follow. On-court coaching is prohibited in both singles and doubles Grand Slam events.

Can Players Talk to Coaches During Breaks or Other Instances?

As players can leave the court for restroom breaks during games, you would believe they can talk to the coaches at that time. But, this is not permitted in any manner, and to prevent this, a tournament official always accompanies the players into the restroom.

The only exemption to the on-court coaching regulation is when there is a downpour. If there is heavy rain and a match is halted, and both players leave the court, the players can speak to respective coaches until the action resumes.

So is there any chance of these rules being changed? For the time being, it appears that the WTA is content with permitting minimal on-court coaching.

The ATP, on the other hand, does not appear to be bending their position, and the four Grand Slams are all staunchly opposed to it at the moment.

There will always be those who support and those who oppose it. Perhaps it will be tried on the men’s circuit at some time, but it will face stiff opposition in the Grand Slams.

Call it tradition or a real one-on-one confrontation, but many players and fans prefer to keep tennis coaching to a minimum after the first serve of the match is delivered.