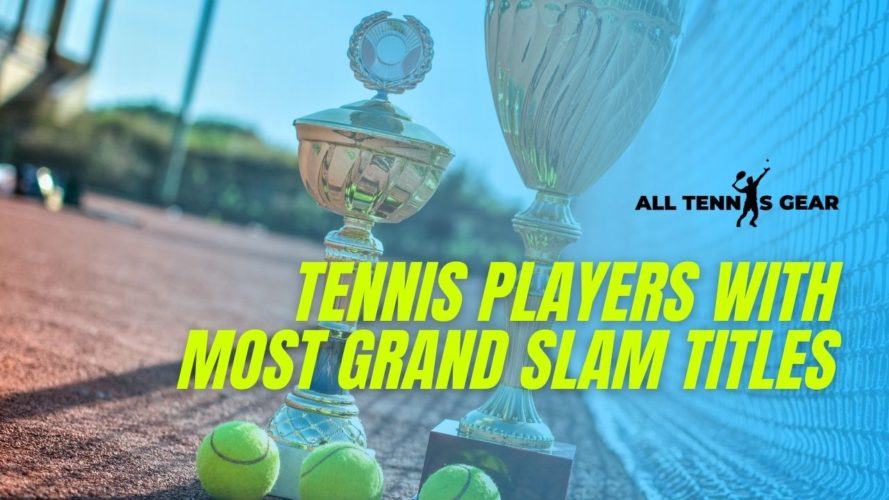 Tennis is not a new sport. However, with the advent of the Open Era in 1968, the game blossomed into the contemporary game we see now.

From the late 1800s until the present, the greatest tennis players in the world have competed for the same four titles- French Open, Australian Open, Wimbledon, and the United States Open.

If you win only one of these slams, your name will be engraved in tennis history. If you win all four, you will go down in history as a legend.

These are the best tennis players who have won the most Grand Slam Championships in history.

By the age of 11, Roger Federer had established himself as one of his nation’s biggest junior tennis players.

In 2001, he stunned Wimbledon by taking out incumbent singles champion Pete Sampras in the fourth round. Federer became the first Swiss player to win a Grand Slam Championship when he won Wimbledon in 2003.

Serena Williams is the most famous female tennis player with 23 Grand Slam singles championships during the open period.

Williams began to play tennis on the public tennis courts in LA alongside her father. Serena started playing pro in 1995. Her sister Venus was already playing professional for a year by that point.

The Williams siblings managed to garner attention for their strong groundstrokes and service, and not to mention their stamina.

A lot of people thought Venus would be the first among the Williams sisters to win a Grand Slam singles, Serena beat her to it in 1999. She won her first US Open that year.

Serena Williams, known for her perseverance, won the Australian Open in 2003, completing a career Grand Slam by winning all four of the slam’s component tournaments.

Novak Djokovic was born in Serbia, Yugoslavia, on May 22, 1987. Djokovic began his international career at 14.

Novak Djokovic got to the final of the Junior Davis Cup for under-14 players in 2001 but lost in singles.

Djokovic achieved his second straight Grand Slam final in 2008, defeating two-time titleholder Roger Federer in the semi-finals, making him the youngest player to achieve the semi-finals among all the four Grand Slam tournaments.

Margaret Court is dominated women’s sport in the 1960s. She won 66 Grand Slam titles and became only the second woman (after Maureen Connolly) to win the Grand Slam in tennis singles in the same year in 1970.

She is the only player to have completed the Grand Slam in both singles and doubles, sweeping the four titles in 1963.

Court rose to prominence after winning the Australian Open singles championship in 1960. She withdrew after marrying in 1967, but she quickly returned to the sport. She won several doubles championships, including the US Open mixed doubles in 1969 and 1970.

Rafael Nadal is the clay court king, having won 13 French Open championships and twenty grand slams in total. He is one of the finest tennis players of all time, let alone the twenty-first century.

Nadal is well-known among tennis fans for his unwavering work ethic and unrivaled mental power. He would eventually triumph in one of the best games ever watched in a five-set thriller lasting 4 hours and 48 minutes.

Nadal lost to Djokovic in the final of the 2021 French Open. A win there would have moved him above Federer’s 20 grand slam championships.

Graf is the only player to have achieved every Grand Slam at least four times. She is widely regarded as one of the greatest female tennis players of all time.

Graf achieved the Calendar Year Golden Slam in 1988, becoming the first and only tennis player to win all four Grand Slam championships as well as the Olympic gold medal in the same calendar year.

Pete Sampras was widely regarded as the best male tennis player of all time until he retired in 2002. Throughout his 14-year career, he ruled the 1990s. He won 14 grand slams and 64 championships in his career.

Boris Becker, Andre Agassi, and John McEnroe were frequent opponents. Sampras set a record by finishing first at the end of the year six times, which has yet to be broken.

Helen Wills won the California State Championships at the age of sixteen. A year later, she earned her first Major in the US Championships, which is now known as the US Open.

Wills dominated tennis for over two decades in a way that nobody had done before and that few have equaled ever. She won 19 of the 24 Grand Slams in which she competed.

Martina Navratilova, one of the fiercest opponents to ever walk the court, ruled women’s tennis from the late 1970s through much of the 1980s.

With 167 career championships, she owns the open period record, and she has 59 Grand Slam titles in total.

She won 18 Grand Slam singles championships and owns the open period records for most singles titles at 167 and most doubles titles of 177.

He was a skilled doubles player who won 16 Grand Slam doubles titles with five different partners.

And three of those occurrences occurred at the conclusion of her career, following her 18th Slam at Roland Garros in 1986.

Chris Evert has the record for the most consecutive years with at least one Grand Slam singles championship, winning 13 in a row from 1974 to 1986. From 1973 through 1986, Evert reached a Grand Slam singles final 14 times in a row.

Has Any Tennis Player Won All 4 Grand Slams in a Year?

All 4 Grand Slams is also known as the Calendar Slam. Only 5 players in history have the honor of winning a calendar slam for the singles championship.

Budge is the first-ever tennis player who won all 4 grand slams in a year. Also, he remains the only men’s singles champion who won six consecutive Grand Slams.

Connolly was the first woman who completed a Calendar Slam in 1953 as well as the youngest (she was only 18).

In 1953, Connolly achieved all 4 finals without dropping any set, making her accomplishment all the more extraordinary. In her maiden Grand Slam Final, she only dropped one set and won the rest eight in straight sets.

Laver is the player in history who has the honor of completing the Calendar Slam not once, but twice. He completed the Career Slam when he was 24 in 1962. It was the same year where he completed a Calendar Slam and won the US Open.

Margaret Court won 11 Australian Open championships in addition to her all-time record of 24 singles. Aside from the Calendar Slam, she has three Career Slams under her belt as well.

Along with a Calendar Slam, Graf also concluded her Career Slam in 1988. She is the second-youngest woman to achieve that.

She also won all four Grand Slam titles, the Olympic Gold Medal, and the WTA Tour Championships in the same year, becoming the first player to do it in a 12-month span.

Who Has Beaten Nadal the Most?

Novak Djokovic has the honor of beating Rafael Nadal the most.

Djokovic’s eight victories against Nadal are the most by any player on the court. Djokovic is the only player to have defeated Nadal twice at Roland Garros, as well as in all three clay-court Masters 1000 competitions.

All of these records and achievements are legacies left behind by some of the greatest players of all time. But records are meant to be broken.

Anyone can claim the title of the most Grand Slams or most Calendar Slams in the near future.