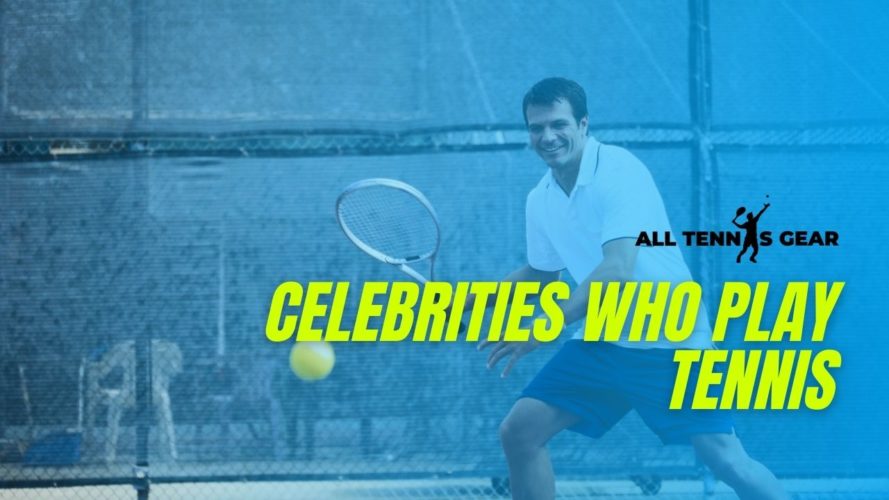 A lot of celebrities engage in different types of sports but seldom do they share anything related to their part-time activities on their socials or interviews.

This is why we fans usually don’t hear much about their sports interests. Celebrities can often be found enjoying a game, but they aren’t seen playing a game as often.

In this article, I am going to talk about 13 celebrities who play tennis. So, stay with us till the end!

Let’s kick off the list with my favorite celeb.

William Bradley Pitt, commonly known as Brad Pitt, is an American actor as well as a film producer. He has received multiple awards for his acting performance, and he’s renowned for multiple amazing movies such as Mr. and Mrs. Smith, Moneyball, Troy, Seven, as well as 12 Monkeys.

Other than these, there are a few movies that changed his career and life forever, and these are Ocean’s Eleven, where Brad was starred with a star cast, and Fight Club, a movie that’s bound to leave you fazed upon watching.

Before Brad became an actor and gained fame worldwide, he used to play tennis on his high school team.

We know her from a variety of characters she played. Scarlett is known for her role of Black Widow in the Marvel Cinematic Universe, Lucy from the movie Lucy, Laura from Under the Skin, and Motoko Kusanagi from the live-action rendition of Ghost in the Shell.

Scarlett Johansson’s first role in mainstream media was in the movie Manny and Lo, and she definitely rose much higher from that. She also has a career in music, and she also formed a band back in 2015.

Fun fact is, she starred in a tennis-related movie named “Match Point”, and she also loves playing tennis in real life.

If you’ve never heard of Matthew Perry, chances are huge that you’ve never seen ‘Friends’. Matthew rose to fame due to the famous NBC television sitcom ‘Friends’, and in it, he played the role of Chandler Bing.

Other than that, he also starred in multiple movies. Some of his notable works are Almost Heroes, 17 Again, Fools Rush, and The Whole Nine Yards. In fact, this versatile actor also worked as a voice actor for the well-received video game ‘Fallout: New Vegas”.

Matthew loves playing tennis. In fact, in an interview, this actor admitted that he once had a passion for this sport and used to practice tennis for 10 hours a day.

Matthew McConaughey is recognized as one of the most talented actors in Hollywood. This versatile actor played a significant role in movies like Texas Chainsaw Massacre, A Time to Kill, Contact, and U-571.

He also starred in a lot of romantic comedies. You’ll find him in movies like The Wedding Planner, Failure to Launch, and How to Lose a Guy in 10 Days.

However, he gained popularity due to roles like that of Rust Cohle in the TV series True Detective, and due to his roles in Dallas Buyers Club and Interstellar.

Matthew McConaughey is a huge fan of tennis, and he likes to spend his time playing this sport.

Ellen DeGeneres is an American Comedian and TV show host who gained fame due to her observational humor.

She majored in Communications at the University of New Orleans, but due to her dissatisfaction with university life, she started working in a law firm, and later jumped from one job to another, before she started performing comedy.

In 1998, she started her very own show, The Ellen DeGeneres Show, and this earned more than 20 Daytime Emmy Awards in its first five seasons only.

Ellen used to play tennis when she was in high school. In fact, she rallied with tennis player Melanie Oudin on her TV show.

Dakota Fanning rose to prominence when she was only 7 years old, and her first work was in the drama film I am Sam. As a child actor, she worked in numerous titles such as Man on Fire, War of the Worlds, Charlotte’s Web, and Uptown Girls.

Later on, she played more mature roles, like the role she had in Twilight and the TV show The Alienist. This amazing actress once revealed that she had a thing for tennis when she was young. She not only loved how the sport worked, but she also loved wearing the outfits.

In fact, she used to play professionally when she was young. However, she soon realized that the heat of tennis was too much for her, so she quit.

Shannon Elizabeth is perhaps known mostly because of her roles in the American Pie franchise. She starred in most of the movies of this series, and she’s also known for being a poker player and a fashion model.

Other than American Pie, she also starred in comedy movies like Scary Movie and Jay and Silent Bob Strike Back.

This actress was very serious with tennis when she was young, and she even plays now from time to time. She also admits that she’d love it if she could spend more time on tennis.

Prince William and Kate Middleton are some of the most beloved couples right now, and they need no introduction.

While there are many interesting facts about them, the one that’d surely draw the attention of a tennis lover is that both of them used to play tennis regularly earlier. In fact, they play rarely even now, and they play against each other as well.

In an interview, Kate said that they were pretty good when they used to play regularly. Moreover, they are good enough even today, and she also boasted that Prince William wouldn’t stand a chance against her if they played now.

We all know Bill Gates because of Microsoft, but did you know that he loves tennis as well? You’ll find him in the galleries of many US Opens as he loves watching tennis. However, he’s not only an avid spectator, but he plays tennis as well.

He doesn’t or never played tennis professionally. However, he did use to play tennis when he was a teenager, and later he couldn’t manage enough time to do so.

Later in his life, Bill got the chance of playing with some of the most famous and skilled tennis players in the world. Back in 2017, Bill was invited to play alongside Roger Federer in Africa, in a charity match.

Kaley Cuoco is mostly known for her role in the sitcom The Big Bang Theory, which aired from 2007 to 2019. You probably knew a lot of things about her, but one interesting fact about Kaley you probably never heard is that she used to play tennis professionally.

In fact, when she was a teenager, Kaley was listed nationally as a ranked amateur. Back in 1998, she was ranked 54th in the Girls’ 14 Singles Tennis in South California. In fact, she’s only good because she’s been playing tennis since she was only three.

However, she couldn’t pursue a career as a professional tennis player because she shifted to acting full-time in 2001.

Charlie Chaplin is one of the most recognizable people in history, and you’ll be astounded to know that he used to play tennis as well!

Chaplin was not only the silent movie star, but he was also one of the most famous left-handers in the world. He often used to play tennis.

In fact, the fact that he loved to exercise isn’t known by many. His favorite form of exercise was tennis. His love for tennis can be understood from the many actions he took over the years.

He was a member of the famous Beverly Hills Club, and he also had a court built for himself in his Los Angeles home.

Tina Fey is an American writer, comedian, and actress, at least that’s how most people know her. Other than that, she has an interesting side to herself, which most don’t know about.

In fact, it’s known that she had taken up her role in Modern Love because she got to take tennis lessons. She confirmed that later on. This only shows how much she loves this sport.

Most of us know Paolo from his days in A.C Milan. He is one of the few players that you can call a legend without a second thought. He played in A.C Milan for 24 years, and he has tons of achievements.

However, once he was done with football, he started practicing tennis professionally, at the age of 48 years!

These were a few among tons of celebrities who play tennis. We’ve tried to include all the popular celebrities, but please mention if we’ve missed anyone.

On another note, who’s your favorite among them?