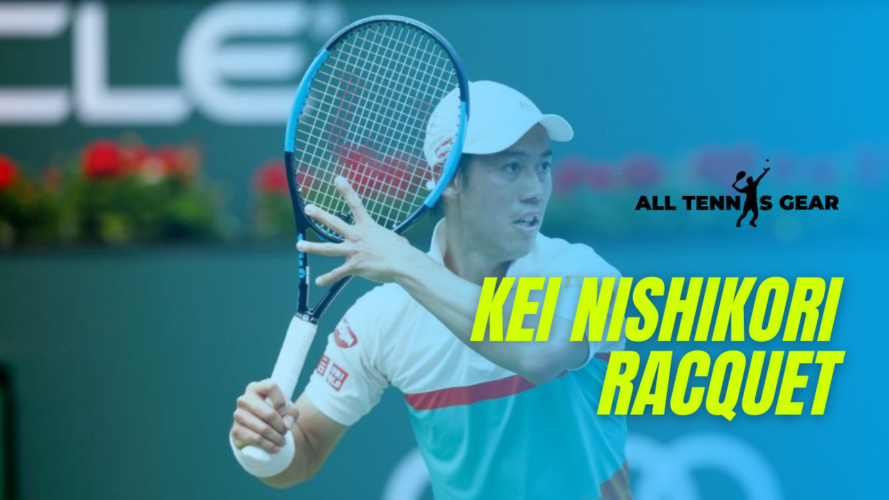 There is always hype around tennis players. If you happen to be a fan of the player or the game or someone interested to play the game themselves, it’s only normal that you will feel that interested in what gears or racquets the player uses.

This is especially true for racquets. There’s a sort of idea that using the racquet of the professional will give you professional-grade performance. To some true extent.

The interest surrounding Kei Nishikori racquet is not new and it is also something that wasn’t known to the public for a long time. However, we have finally got to know what racquet Kei Nishikori uses.

What Racquet Does Kei Nishikori Use?

To put it out, Kei Nishikori uses the Wilson Ncode Tour 95 racquet. Previously it was thought that he uses the Wilson Ultra 95 due to the similarity in color, but actually, he uses the NCode tour 95 one. This is a unique racquet and some of its specifications are above average for many.

This is one of the tour series racquets from Wilson and you can easily get your hands on one of these they are available to the general people.

Nishikori has had multiple paint jobs on this one which may have had the fans thinking that he changes his racquet frequently, but that is not the case and we can expect that he will still be using the ncode tour 95 for years to come.

Specs of the Wilson Ncode Tour 95

As we have already mentioned, the ncode tour 95 is not like any other usual racquet that you have seen. We will explain that as we showcase the specs of this one. However, do not get your hopes high as Kei Nishikori uses a customized version of NCode 95.

But that is more like to suit his personal preference compared to the actual performance boost. So you can get the ncode tour 95 and can expect the same level of performance output from this one.

Two key things that pop up right away are the length and swing weight. For most of the tour racquet that we have reviewed, we have seen them having a length below 30.

But this one has a length of 33.5 cm which is fairly longer than the ones we see commonly. The swing weight is also above average which is a good thing if you are someone who’s into power hitting.

How Does the Wilson Ncode Tour 95 Play?

Now let’s dive into the all-important topic, how does the NCode tour 95 play? To be perfectly honest with you, this racquet is something that requires a bit of getting used to. Mostly because that the length of the racquet kind of shifts the balance of the racquet.

No doubt this is an amazing racquet with some amazing power-hitting abilities, but you will need some time adjusting yourself to the new balancing position of the racquet.

Now let’s talk about how it performs on the ground. Wilson made the NCode be an all-purpose racquet meaning it is a perfect fit regardless of the surface you are playing at.

We tried the racquet at both green surfaces as well as clay courts and honestly, we have found the performance to hold up in every scenario. The racquet delivers in its promises and it is easily one of the best when it comes to hand feel.

For its length, the NCode tour 95 is surprisingly lightweight. This is partly due to the lighter frame used by Wilson. The center of balance on this racquet has shifted considerably downwards towards the handle. This is something you will get used to once you play with it for some time.

What surprised us is the power output with the lighter frame. This is a racquet that delivers quite a punch. You might think that owing to a lighter frame, the racquet will not have much force in it. However, that is not the case at all.

This racquet can generate considerable power from the baseline and as a result, you can hit your shots with ease. There is also a decent amount of spin with each shot. We were sold at the precision of this racquet.

One of the gripes that we have is with the volleys. As a bottom-heavy racquet, it becomes a bit difficult to maintain control over it. When you hit the volleys, the racquet tends to wobble making it not only uncomfortable but hitting precisely also becomes difficult.

However, as you keep playing with it, you will develop more and more control and will be able to hit more precisely.

The serves and returns with this one are very smooth. In our testing, we have found the service with this one to be a breeze. Sure enough, it still takes some getting used to since it is a bottom-heavy one. But even so, you are getting a racquet that is easy to swing and deliver power hitting.

When it comes to the returns, you will see how smoothly the racquet handles them. The lightweight frame along with the loose strings makes the racquet much dampened. I mean honestly, in our testing, it took a good millisecond to register in the hand.

This is again dependent on the personal preference of the player. You might be someone who likes aggressive hand feels from the racquet, but that simply isn’t present in this one.

The dampened coupled with the lightweight frame means that you won’t be able to generate much power like its peers. But that shouldn’t bother you, in exchange you are getting a racquet that can counter the lack of power with insane spin and a good overall precision of shots.

To sum things up, the Wilson NCode Tour 95 is a good racquet for players of all proficiency levels. Most of the tour racquets that you might see out there are made with professionals in mind.

You can also customize this racquet as per your choice to make it heavier with some lead tape. Overall, this is a good racquet that not only feels good in the hand but can also deliver spin and precision better than its competitors.

What Strings Does Wilson Ncode Tour 95 Has?

What this does is that adds a bit of additional weight and tension to your racquet. If you are not comfortable with the stock tension, then these can be a good choice for you.

As for what strings Kei Nishikori uses, we are not sure exactly. However, it is thought that he is using a mixed strong set for maximizing control and spin.

Can You Buy the Wilson Ncode Tour 95?

Yes, you can get your hands on the Wilson NCode Tour 95. But the price range of this racquet is nowhere cheap and you should consider whether you want something professional grade.

As a beginner, you can consider this racquet as it isn’t that hard to be mastered. So if you want something professional grade you can check this out.

However, do not expect your stock racquet to be exactly similar to that of Kei Nishikori. The racquet used by him is a customized version. But since it is the customized version of the stock one, so you can expect a similar level of performance.

The color grading that you may see in his racquets isn’t also available for the general public. You can only get the NCode Tour 95 in one color.

The Wilson Ncode Tour 95 racquet is one of a kind racquet. Not just for the size, but the amazing control and spin that you can have with this one, not to mention the power. Overall, this racquet can be a great choice for beginners as well as the pros out there.