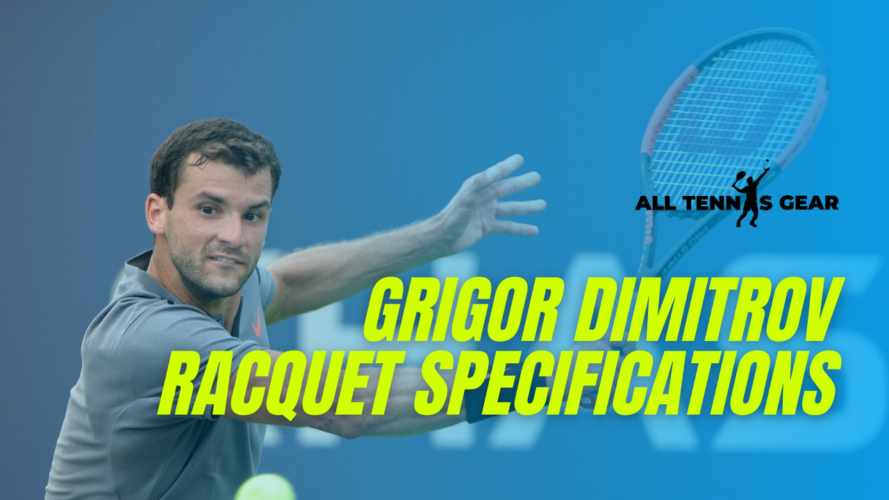 When it comes to the greats of the game, you cannot skip over Grigor Dimitrov in any way. The Bulgarian is the best the country has ever produced with his career-best ranking held at number 3 of the ATP singles ranking. Naturally, there is a lot of fan following regarding Dimitrov, and people are interested to know, which racquet does he use?

What Racquet Does Grigor Dimitrov Use?

Just like you, we were curious to find out what racquet does this Bulgarian use. Now, of course, this is because people attribute quality performance to quality gears as well, but more often than ever, that is not the case.

The racquet used by Grigor Dimitrov is Wilson Pro Staff 97 Countervail. This is one of the more high-end professional-grade racquets from Wilson. But you can still try it out if you want as it is available for the masses.

Grigor Dimitrov has been using this racquet for a long time. Though at times he has gone back to a smaller 93-inch frame, it was all specked out like the countervail. So, it is safe that even in a long time to come, Dimitrov will stay stuck with his countervail.

We have already mentioned that the Wilson Pro Staff Countervail is one of the signature performance series from Wilson. That is reflected in the specs of this racquet. You need to understand that Grigor Dimitrov doesn’t use these exact specs in his racquet.

They are somewhat tuned and have certain modifications in them which makes them a bit more homely for him. But that doesn’t mean the pro staff is lacking in any way. Have a look.

It should be clear that the technical standard of this racquet is amazing. The racquet is fairly standard and doesn’t fall short of other great ones out there. However, you need to understand that this is a pro-grade racquet and as a beginner, you might have to face some issues getting the hang of things with this one.

How Does the Wilson Pro Staff 97 Countervail Play?

Now for the all-important question and probably why you are here. How does it play? If we were to sum it for you, it does an amazing job.

Much of it starts with the design of the racquet itself. The frame of the countervail has carbon fiber at strategic points. This has been done to reduce the arms fatigue of the players. This has some positive as well as negative implications for the players.

The use of a lighter carbon fiber material means that you will not get the swing punch that you would get from other traditional racquets, that is the force output of the swing is not up to par.

However, the shock absorption strategy that Wilson has gone on within this one ensures that your arms will not be strained out in long gaming sessions.

This is an important aspect considering how intensive professional matches can get. So you might be losing out on power initially but this is still a win in the long run.

The second aspect is the dampening of this racquet and to be honest, this is a subjective matter. This is basically how you perceive after the ball hits the bat. Now some player might want to get the raw feeling and other like the dampened impact.

In our testing, we have found the dampening to be a bit too much in this one. Like it takes a good millisecond for the impact to be felt. Now, this isn’t a bad thing necessarily, but in high intensive matches, this delay in the connection may cause problems for you if you are not used to the dampening.

This is again done keeping the long-term health of the player in mind. The dampening ensures that your hands won’t feel strained after a long spell. The comfortability comes at the price of connection here.

Now let’s talk about the actual playability of this racquet. Now it’s no surprise that this racquet won’t come off as a power-hitting beast. We have already cleared that in the specs and build of this racquet. Playing with this one is fairly easy. You get a nice hand feels with the racquet.

The carbon fiber build is evenly placed out so even with a lighter build,  this thing feels sturdy in hand. The swings on this one will give you a great hand feels as it draws much of its power from the baseline.

Shots have a decent amount of spin on them as well. To sum up the playing scenario, it is safe to say that with a little practicing, you will easily get the hang of things without any trouble.

The countervail is also an all-around d better choice regardless of the courts. Most of the professional racquets that you might see are either good for a single type of court. The countervail does well in green surface as well as in clay.

You might not get absolute power from the countervail but what it lacks in power, it more than makes up for in the form of control and spin. The dampening is something you will get used to as you play along.

Oh, and did we mention its sleek looks? The Wilson Pro Staff 97 Countervail is one amazing-looking racquet. It has a beautiful black-on-black design which looks gorgeous, to say the least. We won’t be surprised if new players buy this racquet just for the looks alone.

Now you might be thinking, is it a good racquet for beginners. The answer is yes, it is better than other professional-grade racquets. The reason is the control that you are getting with this one. The countervail dampened every shot more than its peers and that makes it an easy sell for many.

As a beginner, we think this will be a great choice for you because you can get yourself better acquainted with the intensity of games and develop your style with this one.

What Strings Does Wilson Pro Staff 97 Countervail Has?

However, you can have it replaced with any other type of strigs of your choice. It is not clear which strings Grigor Dimitrov uses, but we do know that it is made by Wilson and there are two types of strings used in his racquet. The build for pros will not be similar to the mass-produced one and that is what we are getting to see here.

Yes, you can buy the Wilson Pro Staff 97 Countervail. At over $200, the countervail doesn’t come cheap and you should be sure about it before you go about buying this racquet.

If you are a beginner, this one can be a good choice for you. The control and dampening that you get from this one are unmatched. So if you have the cash to spend, you should go for it.

However, do not expect your countervail to be exactly similar to that of Grigor Dimitrov. Professional player’s racquets get tweaked to churn out maximum performance as well as matching the comfort level of the player. But it is safe to assume that the basics here are similar so is the frame.

You are getting a racquet that has all the pro features. If you want a Wilson Pro Staff 97 Countervail for yourself, you can click here to check it out.

So that concludes our comprehensive take on the Wilson Pro Staff 97 countervail. This is undoubtedly one of the better racquets out there for the professionals. Not just the professionals, the racquet is built in such a way that even beginners won’t have much issue trying out their hand on this one.

So if you are someone who wanted to know how Grigor Dimitrov hits those aces and what racquet he uses, well, now you know and you can get one for yourself as well.

Read More: Novak Djokovic Racquet Specifications: What Racquet Does He Use?