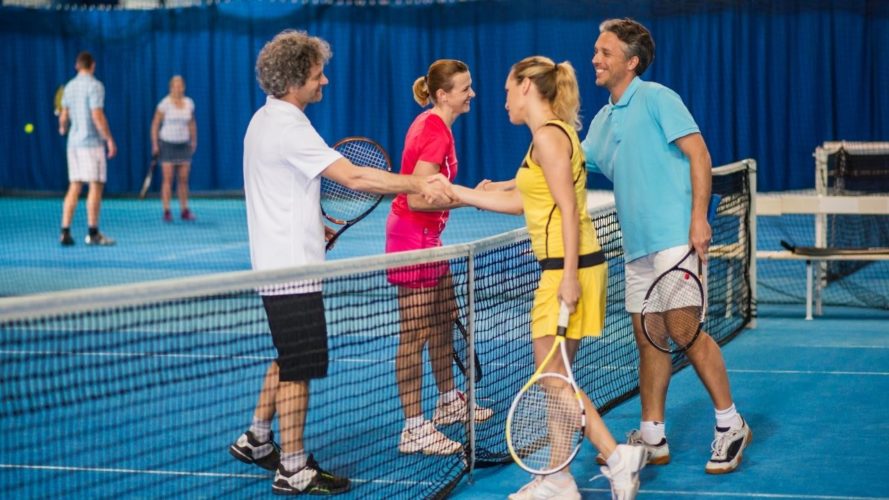 Are you a new tennis enthusiast? Do you want to know how long does a tennis game last? Interested to know how long can you go on playing tennis and when should you stop? Well, the answer to all your queries lies here in this article! Read our article to know all the details.

Before we start talking about the length of a normal tennis game, let us briefly discuss the tennis game itself. When was the first time you were introduced to tennis? Tennis is an attractive world-class sport that has captured the hearts of millions.

Players from all around the world compete with each other from opposite sides of the net. Whoever plays a game of competitive tennis, needs to play according to the rules set by the International Tennis Federation (ITF).

There are many competitions starting from the entry-level men’s and women’s circuit games to the Grand Slam and the Olympic Tennis Events.

There are about 60 Women’s Tennis Association (WTA) tours and 80 Association of Tennis Profession (ATP) tours, all with ranking points and prize money for players. Thus people from 40 different countries participate in these tournament games and enhance their ranking scores.

Many people enjoy tennis as a recreational sport and play only for the love of the game. If you are a beginner and want to know how long does a tennis game last, stay tuned with us!

How Long Does a Tennis Game Last?

Do you know there are different formats for playing tennis? Most of the matches are usually the best of three sets of the game and in some cases end with a final tie-breaker match too.

If you followed previous Men’s Grand Slam games you must have noticed some of the games last till five sets and without needing a tie-breaker round as the final game.

As for duration, the set of three matches are 90 minutes long, and as for the best of 5 matches, it may continue up to 2 hours and 45 minutes. Many of you may be unaware of the fact that a tennis court’s surface determines the length of a game too.

However, a practice match may need only 15-20 minutes to finish.

What is a Set in Tennis?

While playing tennis, players need to score points. A set is actually a number of tennis games, with the minimum number being of matches played being 6.

Whoever wins 6 games wins a set match, and requires to score a margin of 2 winning games from their competitor.

The Fastest and Slowest Durations of a Tennis Game

The fastest duration of a tennis match was for 20 minutes by Susan Tutt and Marion Bandy in 1969.

However, the longest time it took for a professional match to end was for 11 hours and 5 minutes i.e., three days that was played by Nicolas Mahut and John Isner in 2010.

5 of the Longest Women’s Tennis Matches

Let’s have a look at the longest 5 matches played in women’s tennis matches:

5. In the fifth position, we have Andreaa Mitu who played against Maša Zec Peškirič for 4 hours and 41 minutes in the 2012 women’s Pro Circuit.

4. Kurumi Nara and Monica Niculescu played for 4 hours and 42 minutes into the 2010 French Open

3. Francesca Schiavone played against Svetlana Kuznetsova in the 2011 Australian Open for 4 hours and 44 minutes

2. The second-longest match in women’s tennis was played by Maria Elena Camerin verses Monica Niculescu for 5 hours and 3 minutes

1. The longest women’s tennis match ever played was in 1984 at Central Fidelity Banks International Tournament for 6 hours and 31 minutes by Vicki Nelson and Jean Hepner.

Also read: 11 Most Comfortable Tennis Shoes for Women to Buy!

Can a Tennis Match Go on Forever?

If the rule of deciding the winner based on a set on a difference in points of two games, then the match can go on forever unless one player is way better than the other and manages to score significant gaps between two games.

The duration of a tennis match has been a concern for both players and spectators. The tennis federation and governing bodies try to introduce new formats after every few years. The introduction of new match formats helps to curb the duration of the tennis matches.

Even though the duration may be reduced, these formats have not been seen to impact the game quality of the performance of the players yet so far.

Many of you have heard of Fast4 tennis formats, it is a new format that has been played at quite a number of levels including several professional tennis matches and tournaments; it has also been played at the Next Generation Final events since 2017.

The model format was also simulated to find out how it affected the duration of a tennis game.

Also read: What is an Ace in Tennis? (Rules & How to Score)

Now that you have read our article about the duration of a tennis match, you ought to have a clear idea about how long does a tennis game last. Hope you have fun playing and watching tennis matches.