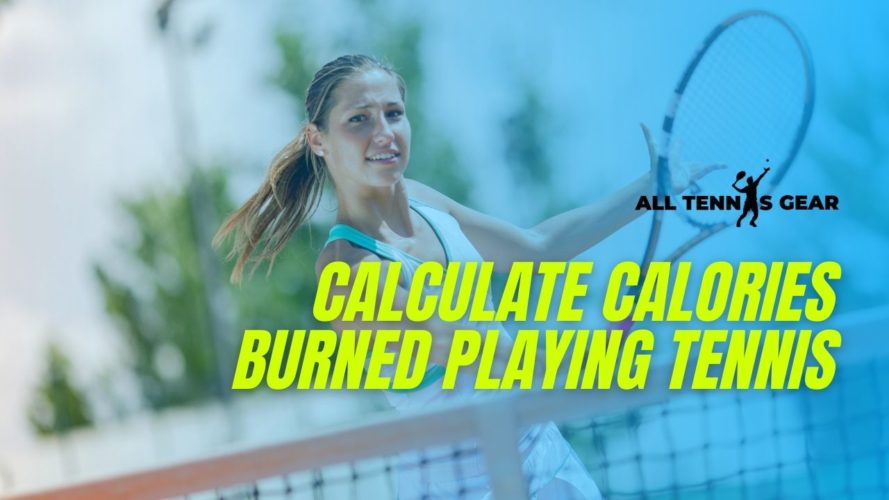 Irrespective of the reason behind your playing, it’s important to understand how many calories you’re burning with every session that you indulge in.

It’s important because it will help you keep track of the calorie you’re losing, so you can figure out the calorie that you need to intake for a healthy life.

In this article, I’ll discuss how you can calculate the number of calories you burn while playing tennis.

Bonus: I’ve also created a tennis calorie calculator that’s included for those in a hurry and who hate playing with numbers.

I’ll also give a general idea about certain scenarios so it’s easier for you to determine the calorie burned without having to go through the tedious calculations.

So, let’s get started!

The Science Behind Calories Burning

Calorie burning and weight loss are two concepts that are greatly interrelated. You lose weight based on a situation that’s referred to as calorie deficit. Calorie deficit refers to the state of consuming fewer calories than what you burn in a day.

However, due to our changed lifestyle and lack of physical stress, we end up consuming excess calories which ultimately leads to fat development and weight gain.

Tennis is a great sport for losing weight because it encourages the players to stress their physique to the limit.

When you’re playing a tennis match, and if you’re playing it seriously with a competitive mentality, then you’ll have to move your muscles swiftly and with great force.

This will force your muscles to utilize more oxygen than it usually does, ultimately helping you burn more calories than usual. With constant motion, your body will be forced to lose more calories in a shorter time.

Plus, even when you’re done playing, your body won’t stop burning calories. The activity will boost your metabolism, so you’ll keep on burning more calories than usual for almost two hours once you’re done.

How Many Calories Do You Burn Playing Tennis?

How many calories a person will burn depends greatly on the person himself. It’s known that the calorie burned depends on the height and the weight of the person concerned.

Other than that, the person who’ll move more while taking a shot or will cover more ground will burn more calories. This not only applies to playing tennis, but it applies to exercise and movement in general.

However, one crucial aspect that affects the number of calories burned while playing tennis is whether it’s singles or doubles.

If it’s a singles match, then the players are required to cover a huge amount of ground by themselves. This forces them to move faster and cover more ground.

On the other hand, doubles tennis confines the players to only half of the previous distance, and this keeps them from covering as much ground as before.

Furthermore, they aren’t required to move with every rally, as their tennis partner may end up taking consecutive rallies. This is why their movements are limited as well, which leads to lesser calorie burn.

Another crucial factor is the type of match the subject is playing. If it’s a competitive match, the players are likely to make more moves.

This will end up burning more calories compared to a non-competitive or a friendly match, where the players may cut themselves and slack and refrain from playing risky shots.

To make your calculation easier and error-free, I created this simple calculator. Simply enter your weight (in KG), type of tennis activity, and total time – the calculator will do the rest.

You can also download this Android app to calculate your calories on the go (again, created by me!)

How Many Calories Do You Burn Playing Tennis for 30 Minutes?

It greatly depends on the model and type of the match. If it’s a singles match and competitive, then a half an hour match is likely to burn 300-400 calories.

On the other hand, if it’s a friendly singles match, then chances are high that the players aren’t going to move much. In such a case, they are likely to burn 200-250 calories in 30 minutes.

However, this is just an estimation, and it should be taken lightly because the weight of the player plays a huge role in determining the number of calories burned every hour.

Does tennis burn more calories than running? This topic has been debated over for a long time. However, we’re going to put an end to that debate today!

Tennis is definitely a taxing game. It puts a lot of stress on your body, and you need to engage your entire body to play tennis properly.

If you’re playing a singles match, then you’ll be moving around most of the time, and you’ll be covering a lot of ground as well.

However, tennis is still a far more relaxing sport than running. When you’re running, there’s no break.

In fact, if you stop to take a break between your runs, you’ll feel like your body is giving up, and you can’t run any longer. This is why runners usually try to run consistently in a session.

When you’re playing tennis, you’re making a lot of body movements, and you’re sprinting short bursts now and then, when necessary.

However, when you’re running, you’re exerting yourself all the time. This leads to a far more taxing experience.

It’s found that if a male person with a weight of 150 pounds runs for 1 hour at a speed of 5 miles per hour, then he’s going to burn 576 calories. However, if the same person plays tennis for one hour, he’s going to lose 414 calories.

Now that you know the statistics, it’s evident that running leads to a higher amount of calories burnt.

However, does that mean that running is a superior activity to tennis when it comes to burning calories? That actually depends.

Is Playing Tennis A Good Way To Lose Weight?

I’ve left the last section with a cliffhanger, and it’s only because the answer to the previous question is directly linked to this one’s answer.

Is playing tennis a good way to lose weight? Well, it definitely is. Is it better than running? That actually depends!

Running is a great activity for losing weight. We’ve already seen that you’re going to lose more weight if you run, compared to playing tennis.

The reason is simple, you burn almost 100 calories more when you run the same amount of time that you would’ve played tennis.

This is because, when you’re running, you’re utilizing every second of the specific period you’re spending running.

However, when you’re playing tennis, there are a lot of rules and formalities that you need to maintain, which inevitably is slowing you down.

For example, you need to wait for the opponent to serve, you have to take some time to focus before you serve, the opponent or you may end up with a faulty service, changing sides, etc.

However, there is no such system loss in running, which is why running is better suited for losing weight.

Then again, another important factor is consistency. You can’t expect to lose weight by running once a week or if you aren’t following a specific routine. This is why consistency is important.

This is where the interest comes in. Interest is one of the few factors that can help you maintain consistency in the routine that you’re following.

If you’re more inclined towards playing tennis, then chances are that it’ll be easier for you to maintain a good consistency. So, in your case, tennis will be a better choice overall.

Also read: What Do Tennis Players Drink During A Match?

As we’ve stated before, the number of calories that you’re likely to burn depends mostly on the type of match you’re playing and your weight.

In this section, we’re going to share a chart that’ll provide an accurate amount of calories that you’re likely to burn, based on your physical attributes and the type of match.

With that, you should be able to pinpoint the number of calories your body is burning with every session of tennis. Tennis is a great game, and it’s a great exercise as well.