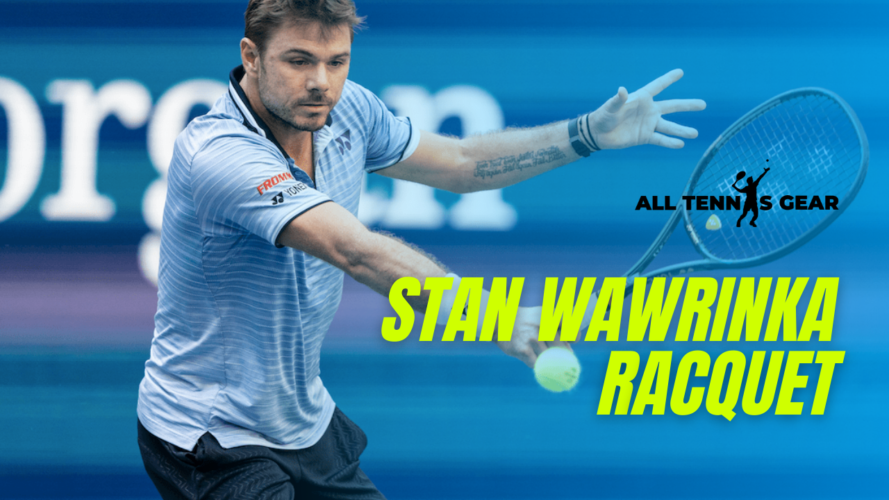 He started playing at a time when Nadal, Federer, and Djokovic are dominating the sport. And they somehow always took away his triumphant glory. But still, Stan Wawrinka has managed to win three grand slams. Beating three no1 ranked players in three finals wasn’t easy. And Wawrinka did it with glory.

On his merit, he added his name to the list of champions. And his legacy will undoubtedly live on in history. I’m not going to worry about how unfortunate he is or how capable he is now. Instead, I’d like to discuss the racquet that aids him on his journey. I’m going to discuss Stan Wawrinka’s racquet today.

What Racquet Does Stan Wawrinka Use?

Stan Wawrinka uses the Yonex VCORE Pro 97 at the moment. Wawrinka has been utilizing this racquet configuration for a long time. He seems to have no intention of changing it anytime soon.

He’s a minor player who depends on strong baseline shots. His one-handed backhand is among the finest in history. He has a solid, flexible body that enables him to produce a tremendous amount of power with his shots.

However, it isn’t the only aspect. His favorite racquet also supports this goal. He designed this racquet to fit his playing style.

Wawrinka’s racquet weighed over 13 ounces when the VCORE Pro 97’s stock weight is 12.3 ounces. This racquet is too tough to carry around and enjoy for long periods. Let’s take a look at the specifications of his racquet.

What strings Stan Wawrinka’s racquet use?

In the mains and crosses, he uses Babolat RPM Blast 16 stringing. In the key strings, he is using 61 pounds in the cross strings with a weight of 57 pounds. In combination with high intensity, this co-polyester string allows him to maintain control over his compelling game. It aids him in playing the ball back within the baseline instead of on the opposite side.

It’s noteworthy that he continues to use Babolat RPM Blast since it must be in Yonex’s highest interests to make a string for him.

If you are a fan of Stan Wawrinka, you would like to give the Yonex VCORE Pro 97 a try. And it would be best if you familiarized yourself with Wawrinka’s style of play before picking up this racquet.

Stan is an aggressive baseliner, in my opinion. He primarily attempts to strike from behind, focusing on the winners. Even though he mostly operates from the backend, his net skills are excellent, and he puts them through at the perfect time.

His backhand, of course, is his greatest asset. It takes a lot of planning and execution to pull this off. His performance is flawless.

One of his shortcomings, in my view, is that he often attempts to do too much. He becomes too offensive and begins to make a large number of unforced errors. It’s undeniable on quick courts when he doesn’t have sufficient time to construct his swing.

Anyone with a good understanding of tennis racquets can distinguish. I managed to point out several of its distinguishing characteristics. They are mentioned below.

Who Should Use This Racquet?

It’s worth having a look for anyone who aspires to be like Wawrinka. If you believe your game style is similar to Wawrinka’s, you should give it a shot.

There are currently only a few racquets on the market that can come anywhere close enough to perfect this playing style. It can be a problematic racquet to adjust to, but most players can adapt well.

You should ignore it if you are still at the beginner level. It could be a bit of a heavy-handed racquet for you to handle. Nobody expects to be frustrated while playing tennis. It might not be the smartest choice to devote time to it.

If you’re searching for something a little unique, it’s worth having a look. It is regarded as one of the most visually appealing racquets on the market right now.

If you want to accept “The Beast,” you’ll need some serious strategy and a strong shoulder!

How does Stan Wawrinka’s Racquet Play?

For novices, the Yonex Vcore Pro 97 may be a little sophisticated. However, it is ideal for others. It has enough customizability to meet the needs of every other player. It’s a very convenient choice that comes in various weights based on the style of play.

Recently, I had the opportunity to try out this limited-edition racquet. I tried to figure out what the secret was to its enormous success. This racquet was extremely comfortable in my hands. It’s a breeze to work with.

It generates a lot of speed thanks to its unique head form. I’m attempting to summarize all of its benefits and drawbacks for you here.

I was blown away after checking groundstrokes with it. This racquet works exceptionally well on both wings. These days, many racquets that succeed on the field have a bigger head size. The 97 square inch head size of this racquet does not feel constricting. It also fits well for those who like to strike flat balls.

This racquet has a massive sweet spot. By utilizing it, players can quickly go for their shots and reap the benefits.

Topspin is a skill that not everyone possesses. It’s an excellent racquet to practice with. It’s a little more topspin. It is helpful to everyone.

I’d give it a perfect score of 9 out of 10 for groundstrokes.

The serving capabilities of the Yonex Vcore Pro 97 are notably incomplete. Some people may be underwhelmed by the force. Serving seems to be on par with or slightly above par.

But someone who can produce their own energy would face difficulty getting the ball wherever they aim it. Expect less “free” strength than with other racquets. For the most part, it will not be accessible.

For its serving capabilities, it will get a 7.5 from me.

This racquet is perfect for volleys and has a lot of responsiveness. The volleys may need to be tweaked a little if you’re coming from another racquet. You may need to add a little more depth and power.

If a person has fine-tuned how this racquet responds to volleys, it is a fantastic choice that everyone can feel confident using. Personally, I was impressed with its capabilities in this department. I want to give it an 8.5 out of 10 ratings.

Can You Buy Wawrinka Racquet?

Wawrinka’s signature racquet is challenging to come by. His racquet, which he built himself, isn’t widely available. Stan Wawrinka’s racquet is only available secondhand or from anyone who has existing inventory. Yonex no longer manufactures the version, and they have completely embraced their new alternative.

Yonex VCORE Pro 97 can be used instead. It looks pretty identical to Wawrinka’s. Stan Wawrinka has made a few more adjustments.

The racquet has a lot to offer. It’s also a reasonably priced racquet. Those interested in purchasing the Yonex VCORE Pro 97 should search online for some attractive offers. Yonex racquets were once tough to come by in the United States. But they now had a much better overall presence in 2019.

For you, Amazon.com has the correct alternatives. To get it for a reasonable price, go to the link below and give it a shot.

This opinion piece was about Stan Wawrinka’s Racquet. The Yonex VCORE Pro 97 is a one-of-a-kind adventure. This isn’t a simple light racket according to any means. It’s a well-made, well-balanced instrument that’s also very effective. It’s definitely worth a look if you’re looking for something a little different.

Read More: Naomi Osaka Racquet Specifications: What Racquet Does She Use?