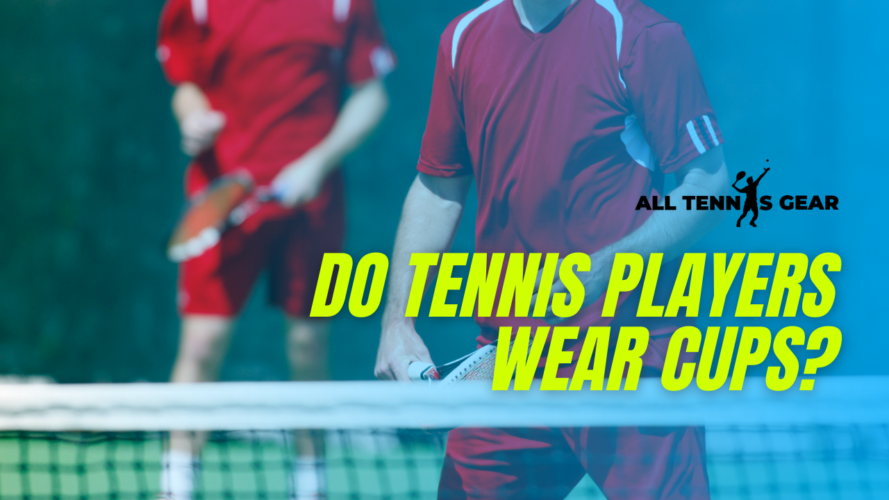 In the majority of sports, men are bound to get hit by a ball in their most sensitive area, irrespective of how careful they are. For many sports like cricket, hockey, and football, wearing a protective cup is mandatory. However, do tennis players wear cups too?

Honestly, it depends on the player. But it’s very common for doubles players to wear a cup due to the higher chances of their groin area being hit.

Who Should Wear a Cup?

Whether you are a professional tennis player or you’re just testing out the sport for recreation, you should wear a cup if you prioritize an extra layer of protection.

However, singles players should not worry too much about getting hard hits as they are rarely close to the net. On the other hand, doubles players are bound to face hard hits at some point in the game.

Unless you never miss a shot, which is unrealistic, you must add this protection to keep the groin area safe. Initially, wearing a cup may seem restrictive and it may also irritate the skin, but that should subside after a few wears.

Is it Necessary to Practice Wearing a Cup?

Since a cup is a shield of protection, it’s constructed with a hard material to serve the purpose. Therefore, it may cause discomfort at first.

If you are preparing for a tournament, you may want to practice wearing a cup throughout the trials too. The last thing you want to do is bring a new factor on the day of the tournament.

Comfort is key when it comes to wearing a cup during a tennis match. Not only should you get the right size for yourself, but you should also consider getting the best undergarments that will go with the cup.

If you do not find a comfortable one for yourself, it’s better to not add this layer of protection at all. After all, it solely depends on the player’s preference. Otherwise, wearing a cup would have been mandatory in tennis.

What Damage Can a  Tennis Ball Cause?

A tennis ball isn’t as hard as other balls in various sports, mainly due to the fuzzy covering as an outer layer. Plus, it’s lightweight as well.

So, when a player is hit with a tennis ball on the groin area, it will not cause any life-threatening injuries. But of course, it’s going to hurt for a while depending on how hard the hit was.

In some cases, it might lead to bruises but you don’t need to worry about any permanent damage.

If you have been playing tennis for a long time, you may have a good instinct on whether the ball is about to hit anywhere near your groin area. A good reflex is going to be a safeguard especially if you’re not wearing a cup.

If you’re a new player, you may want to use your racquet to block the ball or turn in a different direction. This is going to prevent any possible injuries to the groin area no matter how hard the ball was hit.

Since wearing a cup is not mandatory in tennis, players who opt for this extra layer of protection may be portrayed as someone being “too safe”.

So the majority of the players resist wearing a cup during matches. However, there’s more to why they might opt for a cup-free route. They are mentioned below:

Tennis requires you to move a lot, not just in various directions but in different parts of the court as well. The swift movements of this sport are restricted when the player is wearing a cup.

In some cases, players try their best to get rid of any additional gear weight so that their movements are seamless. So, we can conclude that wearing a cup will slow down the player no matter how good they are at the sport.

Plus, the constant adjustment of the cup is also something no player wants to deal with on the court.

Tennis players have to move a lot on the court as it is. This increases the overall temperature of the body. Also, when the player wears a cup, it causes overheating.

No player wants the added heat when they are at a crucial point of the match so they avoid wearing a cup. Sometimes, overheating can also lead to lightheadedness which is certainly not what you need in a sport like tennis.

If you have played tennis for years and did not experience a hard hit on the groin area yet, you’ll most likely not be interested in wearing a cup.

The chances of a tennis ball hitting that area is quite low especially if you are a really good player with good reflexes.

If you see a player wearing a cup, they’ve most likely been injured before. So, they choose this additional protective piece to prevent further injuries.

4. Out of Their Comfort Zone

Some players do not like change when it comes to tennis gear. Adding a cup is something out of their comfort zone so they simply stick to not wearing one.

Unless they feel it’s necessary to wear a cup, they’d rather play without it. You’ll come across tennis players who do not even change their racquet for years so a cup is the least of their worries.

While playing tennis doubles, it’s important to wear a cup as the opponent is in proximity so a hard hit can be extremely painful to the groin area.

However, players hardly come close to the net while playing singles so in that case wearing a cup isn’t necessary. With that being said, make sure you are comfortable with wearing a cup otherwise it will hamper your performance in the court.