Whether you need the equipment for physical education, exercise, or to play tennis at a professional or amateur level, it all comes down to one thing: the racket. The market is full of different types of rackets that all promise many things, and it can be overwhelming for someone who doesn’t know what they’re looking for.

We’re going to review the Wilson Tour Slam Adult Strung Tennis Racket and provide you with all the insider information that you need to make an informed decision before purchasing.

Quick Navigation
Who Is This Product For?
What’s Inside the Box?
Overview of Features
How to Install a Replacement Grip
Alternatives
Conclusion 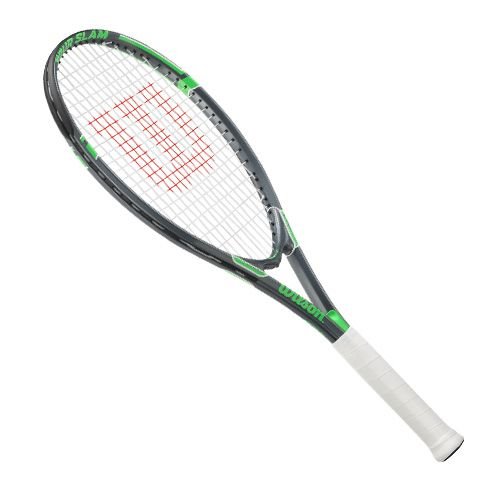 The Wilson brand is known all over the world for their tennis rackets, and this one lives up to their reputation. Its sole purpose is to provide you with power and stability while you’re playing and to do so at an affordable price. There are plenty of Wilson rackets available, and which one you choose depends on your specific needs.

Who Is This Product For?

Many people find tennis to be not just a fun sport and a great workout, but also relaxing. Regardless of your age, you can get some good use out of the Wilson Tour Slam Adult Strung Tennis Racket.

Tennis players who want to focus on power and stability will get the most out of this racket, but its design, extremely affordable price tag and positive consumer reviews make it a suitable option for almost everyone interested in giving the game a try.

What’s Inside the Box?

Unlike many other rackets, this one doesn’t come with a protective cover, which could be seen as a negative. When you purchase it you receive the racket itself, which comes pre-strung, and the box/packaging.

The Wilson Tour Slam is a great racket that offers a lot of versatility for the cost. It is light, which makes it convenient to hold and an excellent choice for anyone who prefers something with less weight.

Despite being light, the racket has a large sweet spot that helps you throw out a powerful hit. That feature alone is something that new players might appreciate, especially since they might require more power with small amounts of effort. The head is pre-strung with appropriate tension to provide heightened tension upon contact with the ball.

Another cool feature of the Wilson Tour Slam is the stop shock pads. These pads act as a stabilizer and are designed to limit string vibration and maximize your control of the ball. This is one of the Wilson Tour Slam’s best features because many find it makes it easier to play with more ability to hit with power and control. Additionally, it has volcanic frame technology that ensures support for newer players who haven’t mastered their technique.

How to Install a Replacement Grip

Apart from the strings, the grip on your tennis racket is the most essential part. While the Wilson Tour Slam does come pre-gripped with shock pad tape, it’s only natural that the grip will wear out over time, especially if you play tennis regularly.

While you might expect replacing the grip on your racket to be challenging, it’s actually quite straightforward. If you don’t want to get your grip installed by a professional (which is always recommended) you can do it at home with just a few simple tools.

First and foremost, make sure that you have needle-nose pliers to remove staples, a pair of sharp scissors to trim the grip, finishing tape for your new grip and a staple gun if you want to secure your grip to the handle at the beginning. To start, you need to remove the old grip tape and staples and make sure you clean any residue from the handle before you replace the tape.

For more information on replacing your grip, you can watch the included YouTube video.

It can be difficult to hit the ball with the correct amount of force using this racket unless you’ve mastered your control, so if you’re looking for control above all else, it might be better to go with an alternative.

The Wilson Racquet Sports Energy XL 2 is a great option to keep in the back of your mind. It has a similar price point, positive consumer ratings and offers greater control. It also features the same V-Matrix technology that the Wilson Tour Slam has.

Overall, we believe this racket is best for players who are new to the game and require more power. The price point is right, brand reputation is solid and the customer reviews don’t lie.

There is some slippage with the grip, so it’s a good idea to learn how to replace the grip or know where to get it repaired if you plan on using it regularly over a long period of time.

Scroll back to top