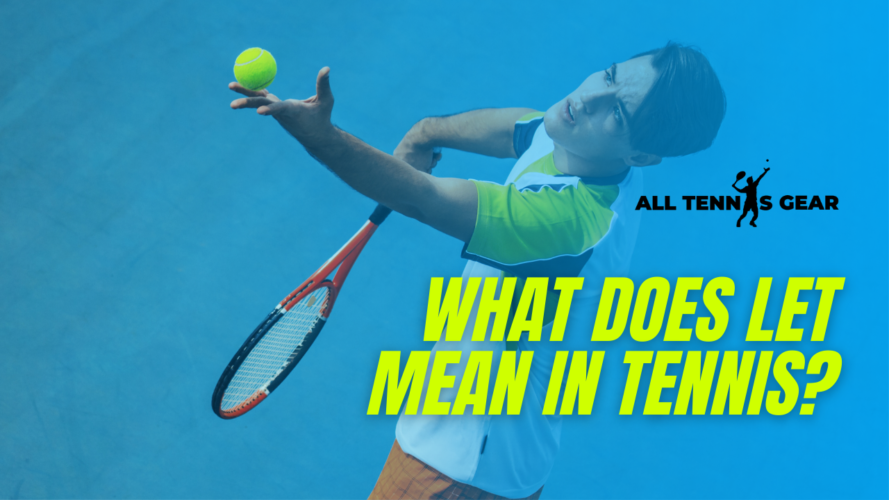 There are quite a few terminologies involved with tennis. I have been trying to learn them myself when I stumbled across the term – let. Today I will try to answer this. What does Let mean in tennis?

Before I start, you should understand that context matters during a tennis match. Let is not restricted to any single scenario, and can occur in multiple situations. For convenience, today I will discuss what a service let is first.

What Is a Let?

In the simplest terms, a let is a call in tennis that asks the players to replay a particular point. This can be called for a few different reasons, such as during a serve – known as a service let.

A Let call can occur during the following scenarios:

Usually, the first is what ends up happening and the umpire is forced to call a Let at that point. This is a service let and is the most common type of let. Not only does this keep the game fair, but it also helps avoid any arguments between the players.

Who Can Call for Let?

A Let call is made by the game’s umpire. When learning about this, I thought that this is an unfair way to approach this. The human eye may not always be precise enough to detect this. Upon further research, I learned how the modern tech deals with it.

Professional tennis umpires monitor a service let using sensors placed on the net, which go off in case the net is touched at any point before reaching the other player. Amazing how far technology has come in sports, isn’t it?

At a recreational or amateur level, players can call for service Let too. However, it is better to use a third person to avoid disagreements or heated moments. I for one don’t think I would enjoy being in a position of dispute like that, I don’t know about you.

Imagine if player 1 ends up serving the ball before player 2 can prepare for it. If player 2 calls a let at this point, player 1 can easily say that he served the ball after confirming that player 2 was ready.

What would you do in a situation like this? Would you call for a Let? Or would you let player 1 have the advantage?

Here is the official definition provided by the ITF – International Tennis Federation, of the word Let in the context of tennis. I have rephrased it into easier terms for convenience of understanding.

In the world of tennis, this is a service let and it will not count – and it is required to restart. It also will not be taken as a service to cancel out the previously committed fault.

The Origin of the Term ‘Let’

Why is the terminology ‘Let’ a word that is used in our daily lives that means something outside of the context of a sport like tennis?

It is unrelated to the wordnet and has absolutely nothing to do with it.

Other Forms of Let

A let might represent an instance where a player has to replay a point, but a service let is not the only one. I mentioned it earlier, I will now be getting into it in more detail.

A let call is basically appropriate whenever there is some kind of interference by the referee to keep the game fair. This can be an external disturbance or any kind of disagreement between the players themselves.

In professional tennis, a different kind of let is called when someone within the crowd is moving, namely during the player’s serve. I found this very weird, but it made sense to me later. As a member of the audience, it is a part of basic etiquette in tennis to move or get up during a changeover.

Here is a list of some commonly used terms in tennis, but may sound unusual to a non-tennis person.

Like Let, many other terms exist in tennis, including the few I have mentioned. The game operates well using these terms properly. I hope you have found my explanation useful, and understand what a let means in tennis.

Read More: How to Make a Tennis Backboard? Improve Your Tennis Skills Alone