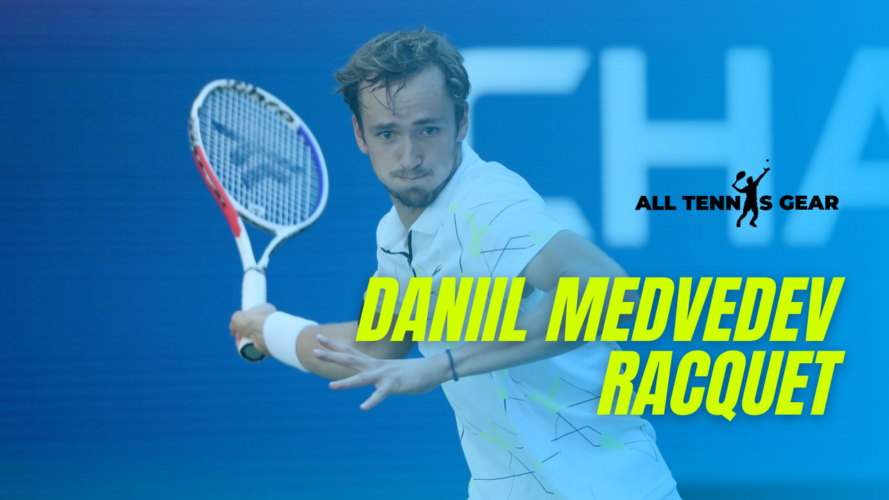 Daniil Medvedev is a Russian professional tennis player who is widely known for his consistent performance and groundbreaking defensive tactics. Even though he stands at 6’6”, Daniil uses a 27” standard tennis racquet.

What Racquet Does Daniil Medvedev Use?

Daniil Medvedev used several racquets in his entire career, but he is most known for using the Tecnifibre T-Fight RS 305.

This is a professional-grade racquet that comes at quite an affordable price, and it offers the features that would allow a player to control the ball with extreme precision.

The T-Fight RS 305 is one of the best racquets from Tecnifibre, and this one will definitely surprise you if you like lightweight racquets that allow defensive playstyle. The ‘RS’ label of this racquet comes from the R-shaped beams on this racquet. This beam provides a better capability for controlling the ball.

These also come with the latest T-Fight 305 technology from Tecnifibre. Due to this, the racquet is composed of long braid continuous fibers. This feature will provide a superior flex that will provide better handling and more powerful strokes.

It also offers the Xtreme Touch Construction that many players love. This feature increases the effective sweet spot that the racquet offers. Thus, you’ll get a better feel overall while playing with this, and you’ll be able to land more precise blows effortlessly. The Xtreme Touch is placed on three portions of the racquet head and just over the grip.

The composition of the RS 305 is quite unique and effective too. The racquet was built from the composition of graphite, polyester fibers, and different alloys. The unique composition not only makes the racquet extremely stable but also allows the players to flex to a great extent.

One of the most major things that players ask from racquets is comfort. You won’t be able to use a racquet for a long time unless it’s comfortable. Even if you manage to do so, you’ll get stressed out very fast, which will put a negative impact on your playstyle.

This is where the T-Fight RS 305 truly shines. This racquet comes with foam grips that allow the players to use them for a long period, thus you can expect consistent performance while using this racquet. Not only comfort, but the foam also helps by dampening the vibration due to impact, and this helps maintain the stability of the racquet.

If you’re looking for a lightweight racquet, then this one will certainly interest you. Once unstrung, the racquet weighs 10.8 ounces only. The head measures 98 square inches. This is much smaller than the standard size and it can take a bit of getting used to, as the overall hitting surface is lower.

However, this will help you control the ball much more precisely, and it will also aid you in defensive playstyle. The string pattern is 18*19, which is much denser than regular ones. This will also help you in ball control and shot precision.

The length of the frame is 27 inches, which is considered standard. Most adults will find no problem adjusting to the length of this racquet. The tension of the strings depends heavily on the strings themselves, but on average, they can range from 49-55 pounds.

How Does Daniil Medvedev’s Racquet Play?

The Daniil Medvedev racquet isn’t for those who play aggressively and with heavy strokes. If you’re looking for a tennis racquet that will allow you to stroke harder, then this racquet is not for you.

However, if you’re a defensive player, then this is one of the best racquets for you to choose from. The Tecnifibre RS 305 will grant you complete control over the ball, and you’ll be able to spin the ball while maintaining the precision of placement.

This is why we highly recommend this only for defensive players. If you’re an aggressive player, then you won’t be able to make much out of this racquet, as it wasn’t designed for aggression.

What Strings Does Daniil Medvedev’s Racquet Use?

Daniil Medvedev mainly uses polyester strings, as these strings provide a higher control and grip over the ball. If you use topspin a lot, then polyester strings will benefit you a great deal. These are also much more durable than the other types of strings, and they offer much superior control as well.

On the downside, polyester strings offer less power. So, if you’re raw power is what you’re looking for, then these might not be your choice.

While they offer low power, you can use high swing speed to send the ball at the speed of your likeliness. This is why polyester strings are considered as much more precise in terms of placement and speed control.

The polyester strings are much stiffer than other types of strings, and this property allows the users to execute topspin much more efficiently.

However, a player requires a lot of skills and has to know advanced techniques for using polyester strings properly. So, we wouldn’t recommend these strings if you’re a beginner or even an intermediate.

Another drawback of polyester strings is that they must be maintained properly for keeping their form. Polyester strings aren’t as elastic as some other strings, which is why they lose tension faster over time.

If you aren’t a professional and if you don’t understand how to maintain the racquet properly, then you’ll have a hard time maintaining the tension of the polyester racquets.

As for the reference tension, Daniil Medvedev likes to set it to 22kg. However, it’s found that the player likes to change the tension depending on the condition. For example, back in 2017, Daniil was found to set the string tension to 24kg.

Daniil Medvedev was found to be using different types of strings at first, but finally, he decided to settle on the Ice Code tennis strings from Tecnifibre. He’s been using those strings for quite a long time now.

Is This the Only Racquet Used by Daniil Medvedev?

Professional tennis players are usually found to be switching from one tennis racquet to another over the years, and the same happened with Daniil Medvedev. This Russian player has changed his gear a few times in his career, and the Tecnifibre T-Fight RS 305 isn’t the only one that he’s been using.

At the early stages of his career, Daniil Medvedev used the Wilson Six One 95, as that was one of the most popular racquets of that time. That racquet was quite heavy, and it can be understood that Medvedev prioritized raw power over control back in those days.

While it was a Six One 95 model, the paint job was customized. Instead of the stock paint, Daniil Medvedev used the Pro Staff 97 paint job, and this made the racquet look even cooler.

Later in his career, Tecnifibre approached him, and he switched over to their firm. Since then, he has been using the T-Fight RS 305. However, there are striking similarities between this one and the Wilson Six One 95 model.

In fact, the similarities run so deep that some people think that the present racquet that he’s using is only a redesign of the Wilson 95.

Can You Buy Daniil Medvedev’s Racquet?

While the Tecnifibre T-Fight RS 305 is a customized racquet made for Daniil Medvedev, this racquet is available for purchase. These racquets are found in similar cosmetics and specifications in which Daniil Medvedev uses them, so if you’re looking for a Daniil Medvedev racquet, you should grab one of these now.

If you’re looking forward to using the same specifications as the racquet used by Medvedev, then you’ll have to increase the weight of the Tecnifibre RS 305, as the one available on the market comes at a lower weight than the one used by Daniil.

However, you might just miss out on the good features offered by the Tecnifibre RS 305. This is why we recommend using this racquet over the one from Wilson.

These were the major specifications of the Daniil Medvedev racquet. If you’re a defensive player, you should certainly try this racquet out.

If you’re an advanced or intermediate player who knows how to handle polyester strings, 98 square inches of head and has some grip over ball control, then you’ll have a great time using these strings.

Read More: Stefanos Tsitsipas Racquet Specifications: What Racquet Does He Use?