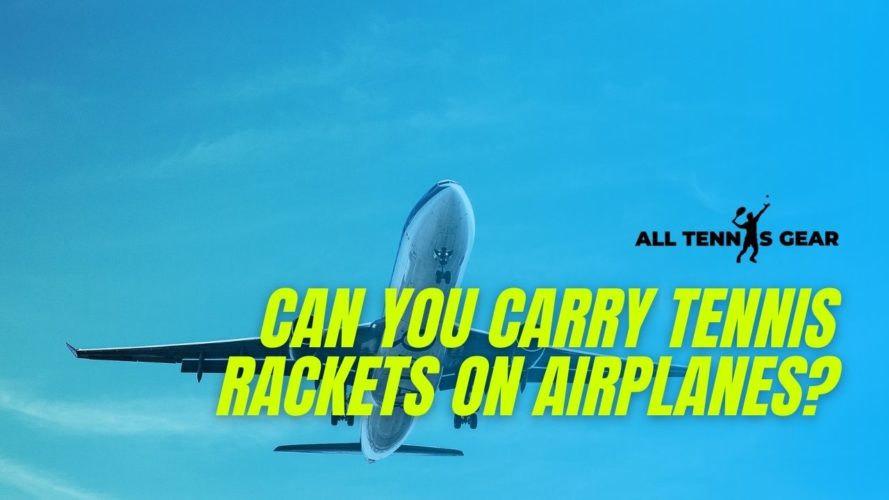 The ultimate question is, are tennis rackets allowed on airplanes? The simple answer would be, yes, according to the official word. If you’re flying, the rules allow you to bring a tennis racket with you.

Tennis rackets can be brought into the cabins with you or check-in and stored in the holding with your baggage, according to TSA advice in the US and the government site in the UK.

Yet, there is a little statement stating that the ultimate decision is made by the TSA officer at the gate, which isn’t very useful.

The official travel policy of the European Union is more unclear. They have a list of forbidden goods for cabin luggage, namely blunt weapons, defined as “artifacts capable of causing significant injury when it is used to strike,” such as baseball bats, clubs, batons, and martial arts gear, but no indication of tennis rackets.

Can You Carry Tennis Rackets On Airplanes?

The first thing to remember is that tennis rackets are permitted to be taken on board by the TSA. The same can be said for the majority of comparable organizations across the world, such as the EU. It is therefore up to individual airlines to decide whether or not to permit rackets aboard their flights.

Many airlines’ regulations do not expressly address tennis rackets. This is a significant change from the wake of 9/11 when most airlines expressly categorized tennis rackets as weapons and required them to be searched.

As a result, the key criterion to consider while traveling with your rackets is whether the suitcase fits within the dimensions permitted for carry-on luggage.

The length of the racket is clearly the dimension that causes problems. Generally, the highest racket length permitted in competitive tennis is 29 inches, with 98 percent of all rackets being 27 inches, so bear that in mind when choosing the frames and bag.

Adding to the complication, on full flights, the larger items of carry-on bags are generally the first to be selected for a shift to the hold. This isn’t optimal if you’re traveling your rackets in a soft bag that might get broken amid the hard bags beneath the plane.

Rules and Regulations of Major Airlines

With no further ado, here is a rundown of the major worldwide airlines’ rules on hand baggage:

As you may notice, most flights’ carry-on regulations do not specifically include tennis rackets. The length of rackets is the most problematic when flying.

Most tennis rackets are 27 inches in length, which is longer than the majority of permitted carry-on luggage. As a result, airline employees and security officers may be unpredictable in their judgment to allow you to bring rackets on board.

Full flights will create extra issues since the overhead bins may be overcrowded. If you are not able to board the plane in the first couple of groups, you risk running out of room for your rackets.

Unlike with a backpack, rackets cannot be stored behind the front seat. Longer journeys often utilize larger planes, so this won’t be an issue for them. Rackets, on the other hand, might be difficult to transport on shorter trips.

What Can You Do If Your Airline Doesn’t Allow You To Carry Racquets?

Flying with tennis rackets may be difficult, so plan ahead of time. Decisions made by airline workers and security officers are subjective, and no common guideline is followed. As a result, here are some suggestions:

When you are at the airport security with your tennis luggage slung over your shoulder, any one of the checking officers can single you out. They can tell you anytime that your cabin luggage is too large or too hefty and must be checked in.

This can occur even if your luggage meets the airline’s weight and dimension requirements. If the aircraft is extremely crowded, check-in personnel may frequently target a bigger piece of hand baggage to be put on the hold instead. And that includes a tennis racket bag.

So, even though the airline website claims it’s fine, bringing a tennis racquet as hand baggage is perilous.